Sam Stosur's French Open campaign has come to an end, with the world No.6 upset by Sara Errani in three sets in the semifinals. 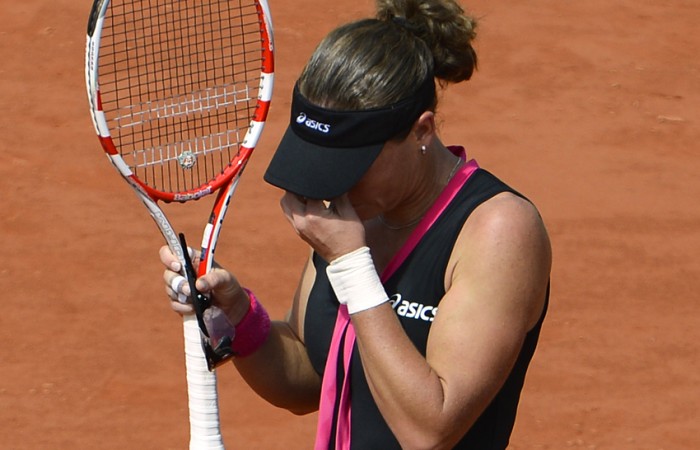 Sam Stosur’s French Open campaign has come to a heartbreaking end on Thursday, with the Australian falling in three sets to Italian 21st seed Sara Errani.

The 7-5 1-6 6-3 result marked the first time Stosur had lost a match to Errani, and ended hopes of an Aussie singles victory at Roland Garros for the first time in 39 years.

Errani moves through to her first career major final, where she will take on either No.2 seed Maria Sharapova or fourth seed Petra Kvitova.

Yet the opening stages of the match indicated a different result.

Looking relaxed and swinging freely, Stosur scored an early break to forge ahead 2-0, only for Errani to hit back in devastating fashion, the Italian winning eight straight points to break back and level scores at 2-2.

The Australian responded well in the fifth game, some steadying play and solid forehands helping her get back on track with a hold for 3-2.

But although games went on serve from that point, Stosur looked less comfortable on Court Philippe Chatrier than the 21st seed, mixing some impressive winners with sloppy errors. The longer the rallies went, the more likely Errani was to win the point.

Those errors would eventually hurt Stosur in the 11th game. A pair of missed backhands handed Errani at 15-40 lead, and although the sixth seed saved both break points with some big hitting, her backhand failed her again. Armed with a third break point, the Italian converted when Stosur dumped a volley into net.

She served out the opening set with a minimum of fuss.

Stosur continued to find herself under pressure at the beginning of the second stanza, with Errani maintaining her extraordinary high level of play.

Yet facing another break point, the Aussie loosened up, saving it with a scorching backhand down the line and then producing a mighty smash and forehand winner to hold for 1-0.

With Stosur applying more pace and spin to her groundstrokes, she began to take the upper hand in the set. And when Errani disputed a line call following a double fault to hand Stosur a break point – which drew whistles from the French crowd – it was clear there had been a momentum shift.

Scoring the break to lead 2-0, the Aussie’s firepower was proving increasingly devastating as the set wore on. She slammed an ace to consolidate the break for a 3-0 advantage, and smacked a crosscourt running forehand return winner to break serve again in the next game. A pair of forehand winners and an ace put the second set almost beyond doubt at 5-0.

Errani typically fought hard to get on the board in the sixth game, but the Aussie made no mistake when serving for the set, landing her 10th ace to lead 40-0, and wrapping up the set with her 11th.

Yet the controlled aggression that served Stosur so well in the second set completely deserted her at the beginning of the third.

With her game falling apart in a mass of errors, she quickly went down a service break, and was soon staring down the barrel of a 0-4 deficit after a sliced backhand error and botched backhand volley made scores 0-30 in the fourth game.

The No.6 seed rallied admirably, her trademark serve coming to the fore as she dug her way out of trouble to get on the board at 1-3. Stosur traded errors and winners in the fifth game, but it was ultimately a pair of winners – one each off the forehand and backhand – that helped her break back for 2-3.

Levelling at 3-3 with a trusty serve-forehand winning combo, the Aussie was well and truly back in the match.

Errani was able to shrug off the disappointment of watching her lead evaporate, responding with a service hold to love to keep her nose in front. And when Stosur’s game crumbled yet again in a rash of errors in the eighth game, the Italian was gifted a break to lead 5-3 and found herself serving for a place in her first ever Grand Slam final.

She didn’t falter. Playing steady tennis and benefitting from more errors off the Australian’s racquet, she calmly reached match point and clinched the victory with a forehand winner into the open court, collapsing to the clay in delight.