Italian Sara Errani is the last hurdle standing in the way of Sam Stosur and a second French Open final berth against Maria Sharapova or Petra Kvitova. 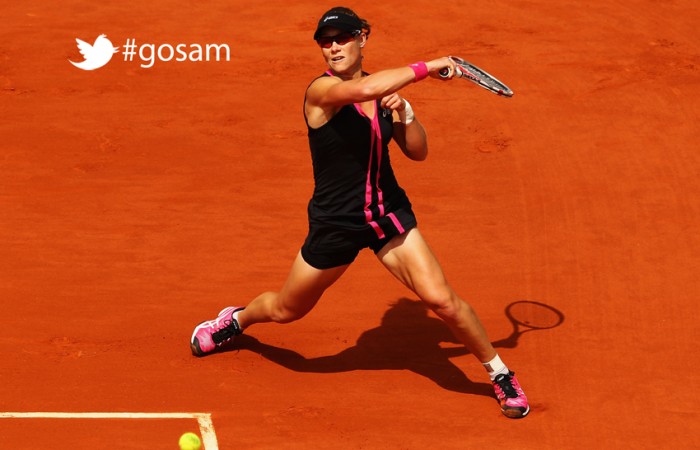 Sara Errani is plotting another Italian job on Samantha Stosur, but Australia’s big French Open hope is having none of it.

Francesca Schiavone’s ambush of Stosur in the 2010 Roland Garros final still burns, leaving the Queenslander on high alert to Errani’s capabilities ahead of their semifinal showdown on Thursday night (starting 10pm AEST).

Errani has lost all five previous clashes with Stosur – including last month on Rome clay – but is arguably the most improved player in world tennis.

The 25-year-old has won 23 of 26 matches for a tour-leading three titles on clay this season, while her quarterfinal triumph over German 10th seed Angelique Kerber was her first success in 29 attempts against a top-10 foe.

The victory propelled Errani into her maiden grand slam semifinal and also ensured she will leapfrog Schiavone and Flavia Pennetta to become Italy’s new No.1 when the next rankings are released on Monday.

“I’ve had success against her in the past, but semifinals of Roland Garros is a whole new ball game,” Stosur said.

“This is probably the breakthrough year for her, making quarterfinals (at the) Australian Open and now here, French Open. You’ve got to respect that and be aware of that.

“You can think about the past and the history of the matches but, if something changes when you’re out on the court, you have to be aware of that and adjust, too.

“She’s a tough competitor and makes you work for it. I have to be ready for a tough match. I’m going to play aggressive and try and play my game.”

Stosur had also been unbeaten in four matches against Schiavone before losing their final in Paris two years ago and then again in a crucial Fed Cup tie last year in Hobart.

But the US Open champion insists she has no mental blocks against Italians.

“Whether they’re Italian, Japanese or Slovakian, it doesn’t bother me. It never really comes into the equation,” Stosur said.

“Obviously it’s just maybe built up here a little bit more now in the press conference with the Italians. They like to remind me that I played Francesca, who is an Italian, and that’s that.

Errani, at just 164cm tall, puts her amazing transformation this year to plain hard work and paying Wilson $US30,000 ($A30,900) to get out of a racquet contract in order to use a 1cm longer Babolat.

“A big change for me really was the racquet,” she said.

The diminutive 21st seed is also renowned as one of the craftiest players on tour and admits pre-match tactics are a major part of her game.

“I don’t have too much power so I have to think more,” Errani said.

If Stosur can get past Errani, she will face either Russian second seed Maria Sharapova or Wimbledon champion Petra Kvitova in the final.