Sam Stosur has enhanced her reputation as the best front-runner in women’s tennis with a commanding French Open quarterfinal triumph over Dominika Cibulkova. 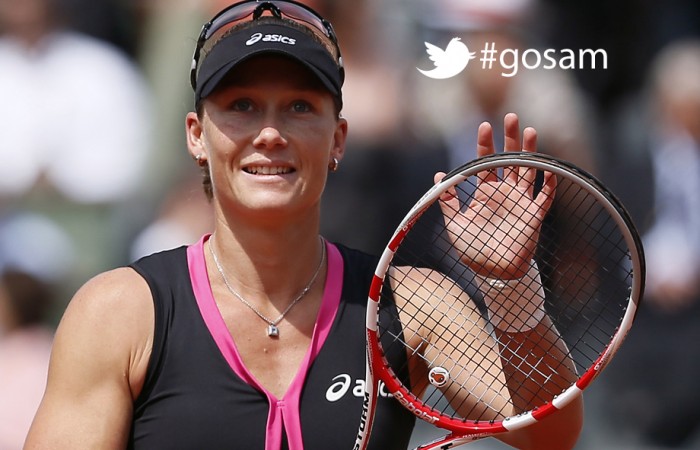 Sam Stosur has enhanced her reputation as the best front-runner in women’s tennis with a commanding French Open quarterfinal triumph over Dominika Cibulkova.

Stosur continued her authoritative march through the draw with a 6-4 6-1 disposal of the 15th seed to reach the semifinals in Paris for the third time in four years.

The US Open champion will face Sara Errani on Thursday for a place in Saturday’s title match after the in-form Italian downed German 10th seed Angelique Kerber 6-3 7-6(2) in an equally impressive quarterfinal showing.

“I’m very, very pleased with the way I played today and to get through,” Stosur said.

“She runs very fast, she’s got quick legs, likes to be aggressive and hit that forehand so you’ve got to make sure you hit the right shots at the right time.

“The last few years have been very good to me in Paris. I love playing on this court and it doesn’t get any better than this.”

The sixth seed is a perfect 49 from 49 after winning the opening set at majors and, as the only woman in the tournament yet to drop a set this campaign, will be a warm favourite to take down Errani in the semifinals.

“That’s a great stat to have, but you also want to have this when you lose the first set – you want to come back, too,” Stosur said.

“It just shows that I try to get off to a good start whenever possible and, when I do that, I can really impose my play on the opponent. It’s obviously tricky for them to try and beat me if you look at that stat.

“So I guess it’s a nice thing to have in the back of your head.”

No doubt in the back of Errani’s head will be the dreaded stat that she has lost all five previous meetings with Stosur, including in straight sets last month on clay in Rome.

Cibulkova had upset world No.1 Victoria Azarenka in the fourth round and made the semifinals in Paris three years ago – but Stosur simply had too many weapons for the diminutive Slovak.

Playing with controlled aggression, Stosur grabbed the first service break of the match in the fifth game as Cibulkova’s defensive moonballing tactics backfired.

Stosur wobbled trying to serve out the set at 5-2, but held her nerve to stave off three more break-back points in the 10th game to pocket the opening set with a scorching backhand winner that caught the line.

The world No.6 recovered from love-40 down in the opening game of the second set to hold and then rifled a backhand down the line to break Cibulkova again to go up 2-1.

The end was nigh for Cibulkova when Stosur nabbed a double break with two big forehands to charge to a 4-1 advantage.

The Australian broke Cibulkova again to close out the quarterfinal in one hour and 25 minutes for her 18th win from 22 claycourt matches in 2012.