Stosur arrives in the French Open semis boasting the most potent weapon in women’s tennis, a vicious kick serve she credits her first mentor for developing. 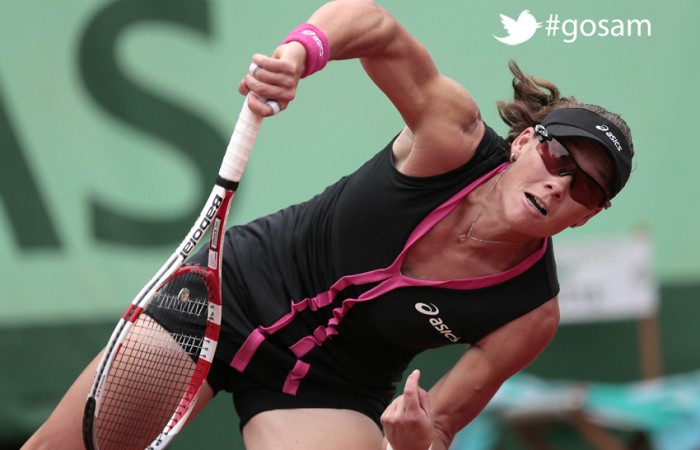 Sam Stosur has hailed her junior coach for helping ignite hopes of a first Australian French Open triumph in 39 years.

Stosur will take on Italian Sara Errani in the semifinals on Thursday boasting the most potent weapon in women’s tennis, a ferocious kick serve that she credits her first mentor for developing when she was just 10 years old.

The deadly delivery once again saved Stosur on several pressure points in her 6-4 6-1 quarterfinal victory over Dominika Cibulkova on Tuesday and the Queenslander admits she was blessed to have Ian Brady’s early influence.

“I’m fortunate that he was a very technical kind of coach and he tried to do that with a lot of his players and obviously saw the potential in me to get the technique down,” Stosur said.

“When you start growing, you get a bit bigger and stronger and it really becomes more and more effective.

“So it’s really all from that young age learning it. At that age, who knows if you’re ever going to make it to this point? But I guess that’s just good looking ahead from the coach I had at that time.

“It does allow me to try and open up the court and then really be able to go the other way and get them running straight off the first shot.”

Like American teenager Sloane Stephens in the fourth round, and countless others who have fallen victim to Stosur’s potent one-two punch on the Parisian clay over the past four years, Cibulkova confessed to being unable to cope with the Australian’s monster serve and heavy forehand.

“Her topspin and her serve – I mean, she played like a man, and it’s really hard to play against a man,” Cibulkova said.

“It was driving me crazy on the court today.”

It is a tactic Stosur will employ again against Errani, who is only a fraction taller than the 161cm Cibulkova, one of the shortest players on tour.

“When your opponent is a little bit shorter, it’s a little bit easier for me maybe to try to use that serve and my forehand up high,” the sixth seed said.

“I’ve got to go out there and probably try and play my game and do what I’ve done in my previous matches to try and get ahead and hopefully get through.”

Striving to become Australia’s first Roland Garros champion since Margaret Court in 1973, Stosur is the only player in the draw not to drop a set in their opening five matches.

The impressive stat is even more telling considering the US Open champion has proven to be the best frontrunner in women’s tennis.

Stosur’s comprehensive victory over Cibulkova – who had ousted world No.1 Victoria Azarenka in her previous match – extended her phenomenal unbeaten record of never having lost a grand slam match after winning the first set.

The 28-year-old is a perfect 49 from 49 after winning the opening set at majors and is a warm favourite to make it 50 against Errani with a sixth victory from six clashes with the 21st seed.

Stosur’s most recent encounter with the vastly-improved Errani came on Rome clay last month when the Australian won 6-3 7-5.

Despite Stosur’s favouritism, though, the Italian will be no pushover as she rides a wave of confidence garnered from winning 23 of 26 matches on clay this season.