With the defeat of world No.1 Victoria Azarenka in the fourth round, Sam Stosur is the highest-ranked remaining player in the top half of the French Open draw. 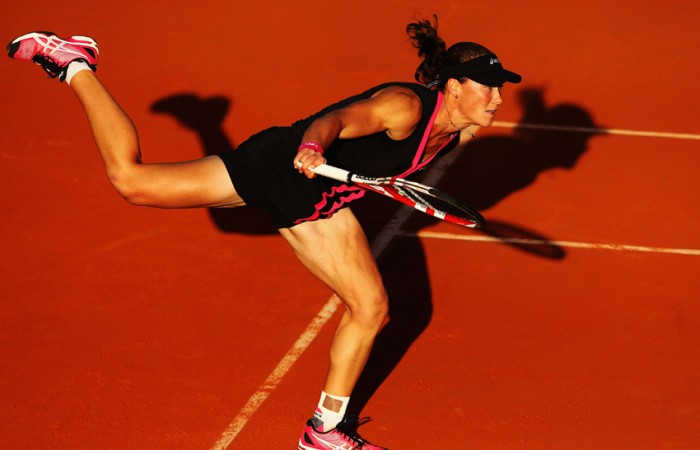 Shielded nicely from growing expectations, Samantha Stosur admits being in Paris – not Melbourne – will help as she attempts to cash in on a dream opportunity to secure a second career grand slam title at the French Open.

The US Open champion plays Dominika Cibulkova on Tuesday for a semifinal berth and is acutely aware of her big chance to reach a second title decider in Paris following the shock exit of world No.1 Victoria Azarenka.

Cibulkova’s stirring 6-2 7-6(4) victory over Azarenka on Sunday spared Stosur a daunting confrontation with her Belarusian nemesis and left the Australian as the highest-ranked player and only grand slam finalist left in the wide open top half of the draw.

Stosur has never won a set – let alone a match – in six career encounters with Azarenka, but she conquered Cibulkova 6-4 6-3 in their only previous meeting three years ago on a hard court in the US.

“My record against Victoria is terrible and now maybe that’s a bit of a break,” admitted Stosur after overcoming a first-set fourth-round fright to beat talented American teenager Sloane Stephens 7-5 6-4 on Sunday.

“But you’ve still got to take advantage of something like that and it doesn’t mean it’s a walk in the park all because you’re not playing Victoria.

“Nothing’s a given and she’s a tough opponent. Obviously to have beaten Victoria that means that she’s doing something right.”

Nevertheless, Stosur accepts she’s now a hot favourite to earn a shot at Roland Garros redemption, two years after suffering a shattering – and unexpected – final loss to Francesca Schiavone at the claycourt major.

And the 28-year-old Queenslander concedes not being under the intense glare of an expectant Australian public can only help her cope with the inevitable pressures of favouritism.

“But absolutely it’s very different. I don’t buy the paper here, you don’t get caught everywhere on the street and everything like that so it’s easier to keep it low key.

“You’re just going out there to play another match and it’s obviously a big one, but it’s not with all the hype around me.”

Stosur said while she’d love to complete some unfinished business in Paris, it was imperative to “stay in the moment”.

“There’s still a long way to go and favourites don’t really mean anything, as we’ve seen today (with Azarenka) and in the first round with Serena (Williams).

“I’m still only in the quarters. Now quarters is a great spot to be, but it’s two matches before you’re even in the final. So I’ve got to worry about this next one and then hopefully go from there. For sure I think it’s an opportunity.

“It’s an opportunity for a lot of players.”

Tuesday’s other quarterfinal in Stosur’s top half of the draw will feature German 10th seed Angelique Kerber against Italian 21st seed Sara Errani.

Stosur has a dominant 5-0 head-to-head record over Errani and has also won both encounters with Kerber – on clay last month in Stuttgart and in last year’s US Open semifinals.