Tomic looking ahead to grass

UPDATE: Following his French Open defeat, Bernard Tomic is happy to leave the red dirt of Paris behind for greener pastures in England. 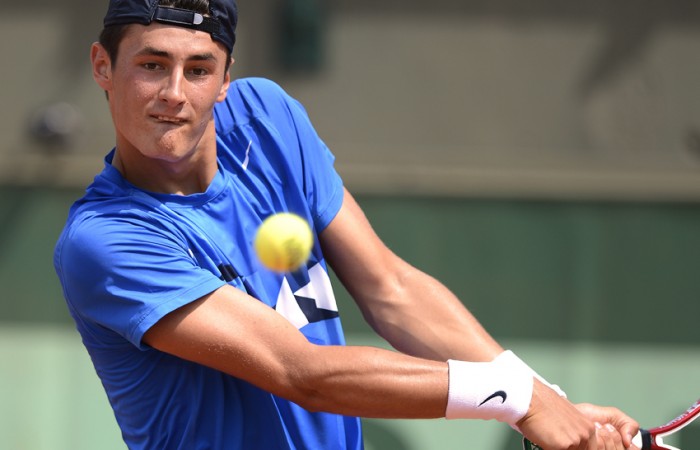 Bernard Tomic is happy to leave the red dirt of Paris behind for greener pastures in England.

Under pressure to defend a bundle of rankings points, Tomic is plotting a two-week grasscourt blitz to secure an all-important top-24 seeding for Wimbledon.

And if plan A fails, the 2011 quarterfinalist will call on a small – though unlikely – favour from the All England Club after a second-round French Open loss scuppered his hopes of a vital rankings rise.

Tomic’s disappointing 6-4 6-1 6-3 loss at Roland Garros on Thursday to Santiago Giraldo, a Colombian claycourter he beat a fortnight ago in Rome, will leave the Australian teenager lingering around his current standing of No.29 in the world.

He needs to be seeded higher than 24th at Wimbledon to be spared a first-week confrontation with any of the world’s top eight players – most worryingly Novak Djokovic, Roger Federer, Rafael Nadal or Andy Murray.

With higher-ranked trio Mardy Fish, Gael Monfils and Kei Nishikori all doubtful of playing after withdrawing from Paris, Tomic could end up being right on the cusp when seedings are determined on June 18, a week before Wimbledon starts.

Hence why the 19-year-old is heading back to his Monte Carlo base for a week of R&R before embarking on a twin title assault at Eastbourne and Halle, Germany to boost his Wimbledon prospects.

“I can’t wait to get on the grass,” Tomic said.

“It’s now time for me to play well. I’m very confident on grass.

“I’ve got two tournaments now – Eastbourne and Halle – where I’m not defending anything and I’ll be seeded well for Wimbledon, maybe even higher to not play the top eight in the fourth round if they seed me high in Wimbledon.

“They do a different seeding base there.”

Indeed they do. Tennis’s most famous tournament is the only one of the four annual grand slams where seedings are not determined solely on rankings, with AELTC boffins sometimes using discretionary powers to promote or demote players.

Sometimes – but not often.

Lleyton Hewitt, for example, was elevated to 16th seed from a world No.26 ranking in 2010 after upstaging Roger Federer in the Halle final the week before.

Hewitt, though, was also a former Wimbledon champion and the most prolific winner of grasscourt matches on tour, Federer included.

It’s highly doubtful whether Tomic would also be afforded such respect on the strength of one previous quarter-final appearance, no matter how recent.

So, in effect, he only really has Eastbourne to improve his ranking and then Halle to underline his claims for a seeding elevation.

In any case, Tomic is excited about a return to grass.

“That’s my favourite surface and I believe this has helped me a lot, this claycourt run the last six weeks for my body,” said Tomic, who won seven matches during his clay campaign.