No.6 seed Sam Stosur will be the lone Aussie in singles action on Day 4 of the French Open when she takes on American Irina Falconi in the second round. 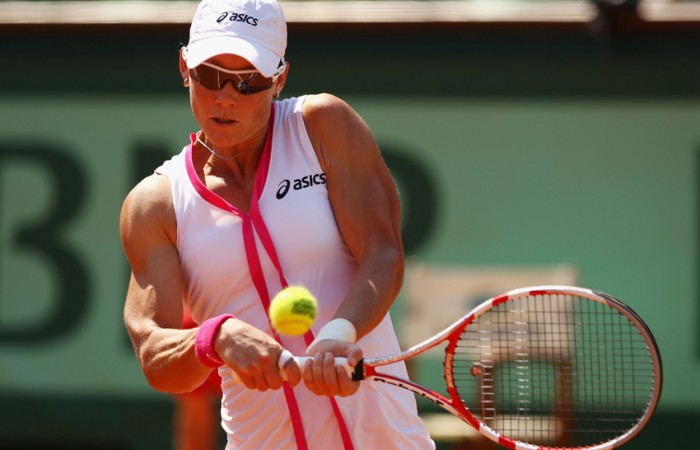 No.6 seed Sam Stosur will be the lone Aussie in singles action on Day 4 of the French Open when she takes on American Irina Falconi in the second round.

After a clinical victory over Brit Elena Baltacha in her opening match, Stosur will look to continue rolling on at Roland Garros when she takes to the “bull-ring” No.1 court in the first match of the day.

Stosur’s match will be telecast live from 7pm AEST on Fox Sports 1, with commentary from Adam Peacock and Kerryn Pratt.

Although it’s a quiet day for Australia in singles in the French capital on Wednesday, plenty more Aussies will be taking to the doubles court.

Marinko Matosevic, Ashley Fisher, Carsten Ball and Paul Hanley will also be in action for the green-and-gold.

Sam Stosur [6] v Irina Falconi (USA) – second round, Court 1, first match
The pair have some recent head-to-head history, with Stosur brushing aside the American on hardcourt at Indian Wells in March, 6-0 6-3, in their only career meeting so far. Stosur comes into the match as the overwhelming favourite, her style of play extremely well-suited to the red clay of Paris and expected to be too much for the world No.112 to handle. The Australian’s form in her first round match against Elena Baltacha was ominous. Yet Falconi is a gritty competitor, last week winning her way into the main draw at the WTA Brussels Open via qualifying, and coming from behind to win her first round match at Roland Garros in three sets over Romanian Edina Gallovits-Hall. The sixth seed will need to be on her game from the opening point if she hopes to move through to the last 32.