An underdone Lleyton Hewitt has succumbed in four sets to Slovenian Blaz Kavcic at Roland Garros, in his first competitive outing since surgery in February. 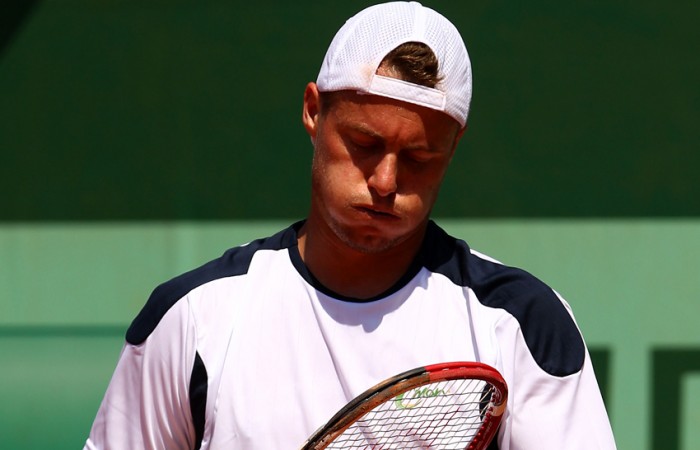 Try as he might, iron-willed Lleyton Hewitt was unable to drag his bionic big toe into the second round of the French Open on Monday.

As ever, Hewitt’s mind was willing and his body reasonably able – considering his near-four-month absence from the tour after having a metal plate and screws inserted in his troublesome left big toe.

Alas, the 31-year-old’s game wasn’t quite ready for the grand slam rigours of best-of-five-sets on clay.

Rusty by nickname and rusty by nature as Hewitt committed an uncharacteristic 56 unforced errors – and 28 alone in the marathon 69-minute first set.

“I had to start somewhere,” Hewitt said.

“I’m sure tomorrow I’ll pull up pretty sore, but it was good for a lot reasons to go out there and play – lasted nearly four hours and physically felt fine.

“There are positives to take out of it.”

The former world No.1 had led 4-1 after breaking Kavcic twice, but frustrating mistakes flowed off his strings and steadily eroded his early advantage.

After losing the first-set tiebreaker and then falling two sets behind, Hewitt looked down and out.

But he bravely fought off a mini match point in the 11th game of the third set to snatch it and raise hopes of a vintage comeback win.

There was no way back, though, after being broken two games in a row midway through the fourth set and the 99th-ranked Kavcic held firm to eventually close out the absorbing contest after three hours and 50 minutes.

But while an appetising second-round showdown with grand slam-chasing Novak Djokovic went begging, there were enough encouraging signs from Hewitt to suggest he could make a decent grasscourt run at Wimbledon next month.

Hewitt will relish a return to his preferred grass courts, firstly at Queen’s where he has accepted a wildcard entry as a four-times former champion.

Then, as a dangerous unseeded floater, the 31-year-old will be hoping for some luck at the Wimbledon draw – a decade after he hoisted the greatest prize in tennis at the All England Club.

On Monday in Paris, Hewitt had the courtside support of Australia’s exciting 16-year-old French Open wildcard Ashleigh Barty, plus most of the capacity crowd on court seven at Roland Garros and the admiration of fellow countrywoman Samantha Stosur.

Stosur could only imagine how Hewitt keeps on keeping on given all his battered body has endured over the years.

“He’s been at the absolute top, been No.1 and won grand slams and he knows exactly what that feels like to be up there and he’s not there at the moment so you have to give him credit for sticking at it, trying hard and coming back from the surgeries and injuries.

“I’ve never had to go through surgeries as such and always stop-starting like someone like he has, so I’m sure it’s very difficult. You can only respect that.

“He’s very tenacious and fights to the death of all his matches so, you never know, given the right surface he could still be dangerous.”