Sam Stosur lived up to her star billing to cruise into the second round of the French Open on Sunday with a straight-sets win over Scot Elena Baltacha. 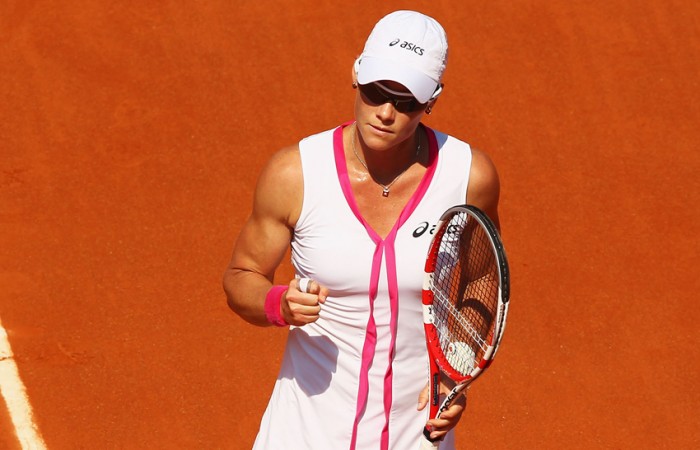 Sam Stosur lived up to her star billing to cruise into the second round of the French Open on Sunday with a straight-sets win over erratic Scot Elena Baltacha.

Australia’s world No.6 and 2010 Roland Garros runner-up had the distinction of opening centre court proceedings at the 2012 championships – and didn’t disappoint in a 61-minute cakewalk.

It was a case of first on and first off, with the 6-4 6-0 rout booking Stosur a second-round meeting with American Irina Falconi.

“I’m obviously very happy with the way I played and scoreline and everything else,” Stosur said.

“It’s definitely a nice one to have underway and (be) through to the second round.”

“Funnily enough, I think I had first match on Sunday last year too here, so it wasn’t anything I guess foreign in that sense,” the Queenslander said.

“Obviously first match, it’s a bit of an early start, but always nice to get through it now.

“You have the whole day and whatever else to recover and, yeah, enjoy.”

Other players, notably flamboyant Frenchman Jo-Wilfried Tsonga, have complained about the French Open breaking from grand slam tradition with a Sunday start.

But not the easygoing Stosur, despite the sixth seed’s schedule now meaning she won’t play again until Wednesday.

“I don’t think it’s too big a deal now that it’s more of a proper schedule. I think it’s better,” Stosur said.

“The first year there was only a handful of matches and if you were on the schedule then, it really didn’t feel like the tournament had started.

“Nobody else was thinking that the tournament had started. Even the feel underneath in the players’ restaurant didn’t feel like it was happening.

“Whereas now I think with more of a full schedule, it feels like it’s the first day of the event.”

While Stosur has previously reached a semifinal and final in Paris, Baltacha had only once before progressed beyond the first round – and the gulf in class was evident.

Stosur raced to a 3-0 lead after breaking Baltacha in the second game with a series of big forehand winners.

The sixth seed continued to hold comfortably until committing two unforced errors and her first – and only – double fault of the match trying to serve out the opening set in the ninth game.

She quickly regrouped to break the Scot for a second time to pocket the set in 37 minutes.

Baltacha barely won a point in the second set as Stosur utterly dominated from the back of the court.

Stosur broke the world No.68 three more times and, fittingly, closed out the match with a booming forehand return winner.

All up, the Australian clubbed 21 winners in 16 games and made just nine unforced errors in a confident start to her title campaign.