Feeling like a Parisian, Sam Stosur looked right at home too as she romped past Elena Baltacha and into the second round of the French Open. 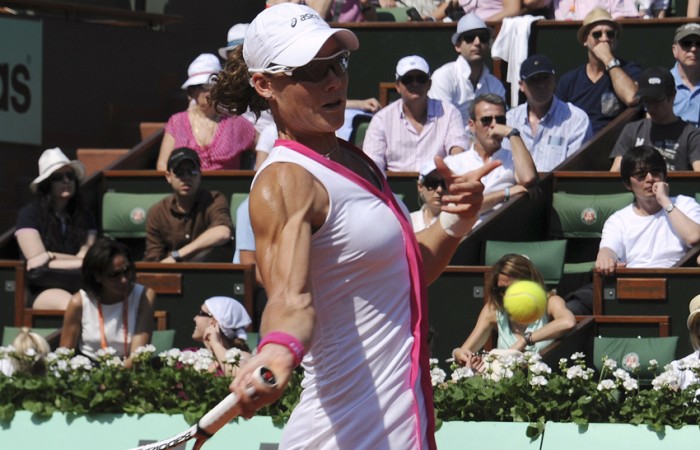 Feeling like a Parisian, Sam Stosur looked right at home too as she romped into the second round of the French Open.

On court and off, Australia’s 2010 Roland Garros runner-up is once again revelling in conditions tailored to her brutal back-court game.

Stosur overwhelmed Scotland’s Elena Baltacha 6-4 6-0 in her opening match and will be hoping the brilliant summer sunshine continues for her next outing on Wednesday against unseeded American Irina Falconi.

In fact, Stosur will be praying for a full fortnight of scorching heat in the French capital as she looks to cash in on the faster claycourt surface.

“This is the best clay court in the world. You can really trust your movement and the bounce of the ball is more lively – but it depends on the sun.”

With the sun beaming down for Stosur’s opener, Baltacha conceded she was powerless to cope with the ferocity of the sixth seed’s heavy groundstrokes and high-kicking serve.

“Obviously with such shape that she uses, if you drop anything just a bit short, then she really takes advantage of it.

“Obviously she wants to run around that backhand and spank that forehand. She uses this really well.

“That was the thing that I really tried to be careful of, to really try and pull out wide. But it was very difficult.

“She played unbelievable in the second set. She went up a couple of levels, a couple of gears, and then she was just too good.”

The true conditions at Roland Garros are a far cry from the maligned blue courts of Madrid and the inconsistent bounce of Rome.

“It’s nice to be on a real clay court again and actually feel like you can play more clay-court tennis,” Stosur said.

“I think that’s one of the things that’s probably annoyed a lot of people (at the other events), is that you’re on a clay court but you can’t play real clay-court tennis.

“This is obviously a beautiful court to play on. The ball definitely gets up high. You can use your kick serve and topspin groundstrokes.”

Feted in France for her stylish power game – and no doubt her former alliance with Lacoste – Stosur had the honour of playing the first centre-court match of the tournament on Philippe Chatrier for the second year running.

“It’s nice being out there. I definitely feel that there’s support there,” she said.

“I always feel like they’ve liked me over here.”

The feeling’s mutual and, unlike when she struggles under the public glare and pressure come Australian Open time, Stosur is also loving going about her business off court in a more relaxed environment.

“Even the street that I’m staying on had a little antique flea market type thing through the whole street,” she said.

“So you go for a walk before buying dinner and you kind of feel like more of a French local where I’m staying than a tourist.

“I’m not really a good tourist, I have to say.”