Lleyton Hewitt would relish a French Open showdown with history-chasing Novak Djokovic should his battered body survive its first round match. 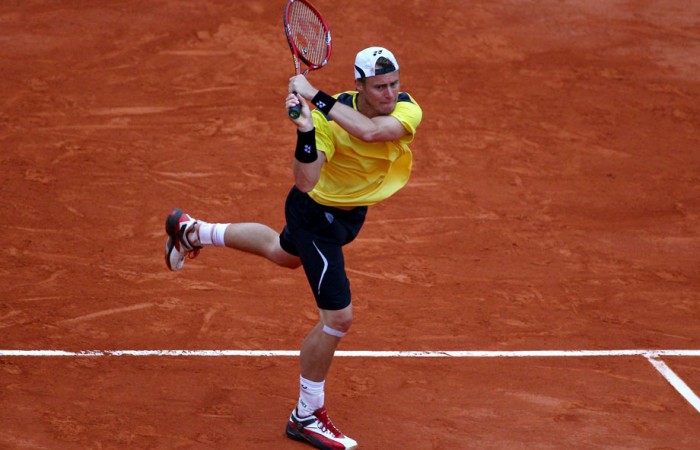 Hewitt will take on Slovenian qualifier Blaz Kavcic in his long-awaited comeback from foot surgery and is acutely aware that victory would likely set up a second-round tussle with Serbia’s all-conquering world No.1.

“It would be a good challenge that’s for sure,” Hewitt said after a typically gruelling practice session on Friday under the discerning eye of super coach Tony Roche.

Even Hewitt would admit to being a raging underdog to shatter Djokovic’s dreams of becoming the first man since Rod Laver in 1969 to hold all four grand slam trophies.

But that’s just how he likes it.

“He’s going to be competitive no matter what happens,” Roche said.

Djokovic needs no reminding how dangerous the lion-hearted baseline slugger can be after overcoming some nervous moments in a high-quality fourth-round encounter at this year’s Australian Open.

“Lleyton is a legend of our sport,” Djokovic said after Friday’s draw.

“He has had so much success on the tour. He’s still a great competitor and he has shown that in the Australian Open.

“We played four sets, a tough match. I haven’t seen him playing lately and clay is not his favourite surface, but he’s always out there. You can always expect him to go and fight until the last ball.”

Clay may indeed not be his favourite surface, but Hewitt is certainly no slouch either on the red dirt of Roland Garros.

The 31-year-old former world No.1 is proud to be the only player in the 128-man draw, Rafael Nadal and Roger Federer included, to have reached the last 32 in 10 straight appearances in Paris.

“I’ve gotten better as the years have gone on and nearly everyone I’ve lost to here has been a bloody good player really, one of the top guys who has obviously gone on to close to winning the tournament.”

In fact, the dogged South Australian has lost to six-times champion Nadal in three of his past four French campaigns.

The dual major winner will almost certainly go down swinging once more against the tournament’s top seed.

But he views any court time against a quality opponent a bonus before heading to London for Wimbledon and the ensuing Olympics at his beloved All England Club.

“I’m going to pull up a bit sore, I’m sure, after my first match for a long time, so for me physically it’s more about it’s about trying to get all that out of the way before the grasscourt season really.

“I’m not coming here with the highest expectations.”