Stosur stunned by qualifier in Madrid

Sam Stosur has fallen to giant-killing Czech Lucie Hradecka at the Mutua Madrid Open, on the receiving end of 19 aces in their tightly contested quarterfinal. 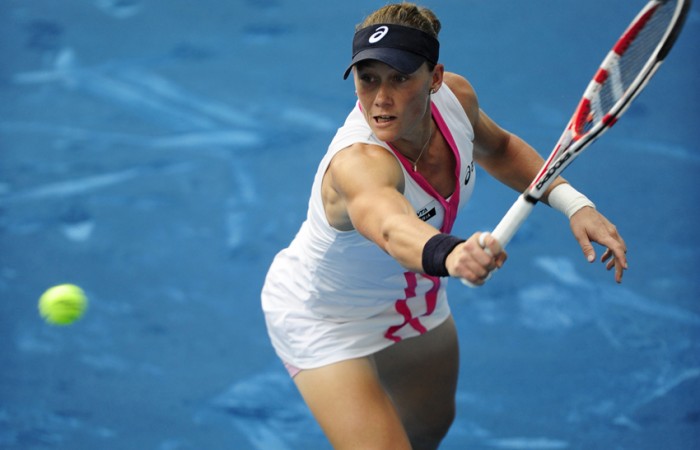 Hradecka will face Serena Williams for a place in the final after the American thrashed Maria Sharapova to reach the semis.

Stosur’s loss perhaps should not have come as a surprise – Hradecka had earlier in the tournament eliminated defending champion and No.4 seed Petra Kvitova.

Throughout the near two-hour match both women were dominant on serve, with Hradecka winning 82 per cent of points on her first serve, and Stosur 77 per cent.

But it was the Czech’s stellar ace count that proved decisive in the end.

Stosur’s next stop will be in Rome – where she reached the final in 2011 – before she heads to Roland Garros for the French Open beginning 27 May.

Williams, the ninth seed, cruised to a 6-1 6-3 win over second-seeded Sharapova, the recent Stuttgart champion, hitting 11 aces, 28 winners and enjoying five breaks of serve in 80 minutes.

Williams said while the blue clay courts remain problematic, the issue was not enough to make her consider skipping the event in 2013 as Rafael Nadal and Novak Djokovic have threatened to do.

Eighth seed Li was playing in her second clay quarterfinal after Stuttgart.

Azarenka said that after losing the opening set against Li, she still has no idea how she was able to turn the match around for victory in just under two hours.

“She played unbelievable in the first set,” said the top seed.

“I knew I had to do something. I don’t know if it was confidence or self belief or what. I don’t know what happened but I managed. I started to get into the match and build up my game.”

On the men’s side, world No.1 and defending champion Djokovic crashed out and vowed never to return to play on the tournament’s controversial blue clay.

“I want to forget this week as soon as possible and move on to the real clay courts,” said the top seed, who beat Nadal a year ago for the trophy.

“They can do what they like, I won’t be here next year if this clay stays.”

Nadal also insisted on Thursday that he, too, would not play the Madrid tournament if the blue clay remains in place in 2013.

In stark contrast, third seed and 2009 winner Roger Federer became the only elite survivor after another effortless performance in a 6-4 6-4 defeat of fifth seed David Ferrer.

The Swiss star will next play Tipsarevic, whom he has beaten four times.

Federer was unwilling to get dragged into the controversy over the court conditions.

“If you want to be a good claycourt player, you must be able to play everywhere,” said Federer.”

The 16-time grand slam champion could move to second in the world behind Djokovic should he win the title on Sunday.

In other quarterfinal action, Argentina’s Juan Martin del Potro hit 10 aces to beat Alexandr Dolgopolov of Ukraine 6-3 6-4 and set up a semifinal with Tomas Berdych.