Australia’s Sara Tomic, Priscilla Hon and Kimberly Birrell have qualified for the World Junior Tennis competition finals at the Asia/Oceania event in Malaysia. 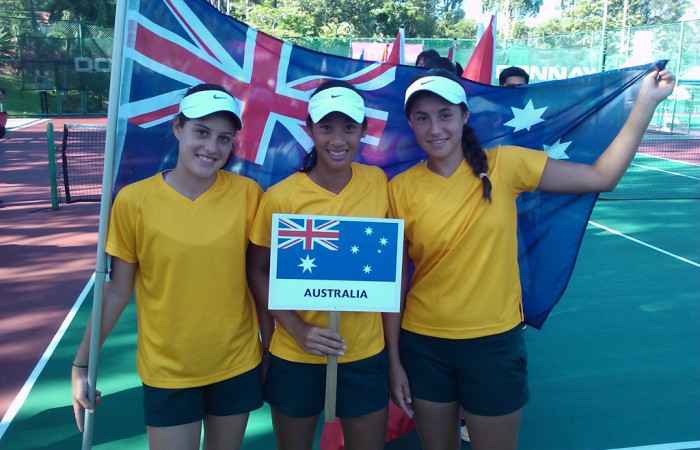 The girls’ booked their ticket to the Czech Republic in August after they won 2-0 over Japan in the sudden-death quarterfinal yesterday, having earlier advanced to the round of eight after 3-0 victories over Uzbekistan, Philippines and No.8 seeds New Zealand.

Hon was first to open proceedings against Japan, claiming a 6-3 6-3 victory against Chihiro Muramatsu.

Tomic then took to the court for the second singles rubber, recovering from a first set deficit to defeat Momoko Kobori 4-6 7-6(5) 6-3, a match that nearly took three hours. With the tie secured the doubles rubber wasn’t played.

“It feels great to qualify and we now have the opportunity to go to the Czech Republic and play against the world’s best. It’s the best birthday present I could have hoped for,” said Hon, who celebrated her 14th birthday yesterday.

“Japan was a really tough opponent. They never gave up and made us play for so many balls,” added Tomic.

“We’d like to win this week’s tournament so we’re determined to finish as high as possible to improve our chances in Europe.”

Team captain Anthony Richardson, National Academy Coach QLD was relieved the girls had confirmed their spot at the world final.

“It’s been a tough week for the girls. As the top seeds we have had to play matches that we’re expected to win and every other team has lifted trying to beat us,” said Richardson.

“So far the girls have handled those pressures well and we are undefeated to date. There are certainly many things we can improve in our last two matches.

“We’ll be working on our ability to stay in the moment and deliver consistent intensity. Tactically we can get a lot better at structuring our points – using variety and specific combinations to build points rather than looking for the easy option.”

The World Junior Tennis competition is an ITF tournament for players aged 14 and under. The top 16 boys’ and girls’ teams from regional qualifying compete for the title with over 100 countries represented in the opening stages of the competition.