The Australian boys’ team has qualified for the World Junior Tennis competition finals after finishing fourth at the Asia/Oceania qualifying event in Malaysia. 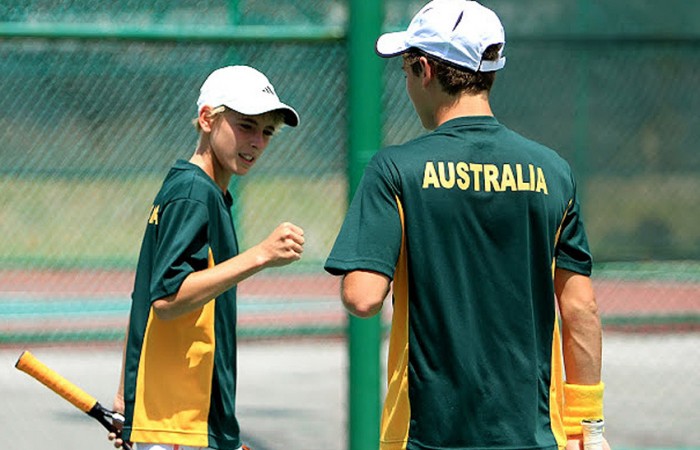 The Australian boys’ team has qualified for the finals of the World Junior Tennis competition after they finished fourth at the Asia/Oceania qualifying event in Kuching, Malaysia on Saturday.

“I’m proud of how the boys performed all week. They competed really well, were fired up and gave their best efforts all while being great sportsmen,” Jarrad Bunt, National Academy Coach NSW said.

“Making the semifinal was a goal the boys had so they would be able to play the finals in Europe later this year. So to achieve that feels great.

“All in all it’s been a fantastic experience for the boys. They were able to compete against the best kids in Asia, playing different styles under tough conditions.

“Doubles is the area the boys need to improve on, so we will focus on this in the coming months. If they are able to compete the way they did, I think we can do well in August.”

Korea, Japan and Chinese Taipei have also qualified for the finals.

The girls’ have posted some impressive results in recent weeks with Birrell reaching the quarterfinals and Tomic winning the Optus 14s National Claycourt Championships, while Hon won through to the semifinals of the Gallipoli Youth Cup, an ITF Junior Grade 4 event.

This week the girls’ are the top seeds for the competition and have drawn Uzbekistan, Philippines and No.8 seeds New Zealand in their pool. They will play Uzbekistan in their first round-robin match and will need to advance to the semifinals in order to join the boys’ in the Czech Republic.

Ahead of the tournament, Priscilla Hon said the team had trained and prepared well and was looking forward to competing.

“We’re feeling excited and confident coming into this week.  We were the first girls’ team to arrive and we’ve prepared well.  It took a little while to get used to the conditions, but we are ready to go for our first round match,” Hon said.

“It’s an honour to play for our country and we are hopeful that we can do Australia proud.  We have all represented Australia before on international tours, but this is our first opportunity to play as Team Australia,” Kimberly Birrell added.

Anthony Richardson, National Academy Coach QLD is captaining the side and is happy with the way the girls’ have trained over the weekend.

“The girls have settled into the tour really well.  All of the girls are from Queensland – they often train together and are really great friends, so I think this familiarity really helps when you are trying to prepare well for a prestigious event in a foreign country,” Richardson said.

“As the top seeds, I expect the girls to compete strongly. However, it is really important that as a team we establish some really professional habits in terms of the way we prepare and execute with a disciplined mentality.

“Hopefully we qualify and then we can go to Europe with some positive routines in place and some refined doubles combinations also.

“China, Japan, India and Korea will no doubt be strong.  Our main priority will be performing to the best of our ability regardless of the opposition.”

The World Junior Tennis competition is an ITF tournament for players aged 14 and under. The top 16 boys’ and girls’ teams from regional qualifying compete for the title with over 100 countries represented in the opening stages of the competition.