Stosur starts with a win in Madrid

US Open Champion Sam Stosur is off to a winning start on the blue clay in Madrid. 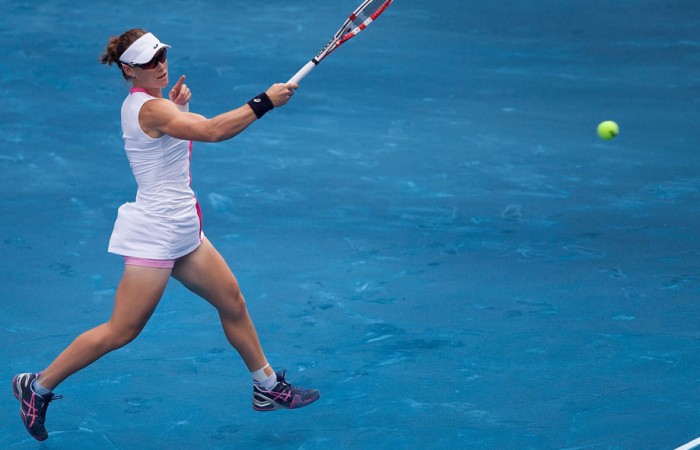 US Open champion Samantha Stosur got off to a winning start at the Madrid Masters on Saturday, advancing to the second round with a 7-5 4-6 7-6(5) defeat of Croatian Petra Martic.

“Petra was playing really well, and it really went down to the wire today,” Stosur said after the match. “I thought my level got better and better as the match went on, and the last half of the third set was the best tennis we played. It was really tight, really close. I’m very, very pleased to get through that one.”

Next for Stosur is young American Christina McHale. “She’s an up-and-coming young player who hits the ball well and is a great athlete,” Stosur said. “I will have to be prepared and be on my game. She probably has nothing to lose.

“We’ve practiced a few times and I think we’ve played one other time.”

That one time was on hard court in Stanford in 2010, a match that Stosur won in straight sets

French Open winner Li Na, the eighth seed, also made it through after dominating her opener against teenaged Madrid debutante Garbine Muguruza Blanco of Spain, who saved two match points before finally falling 6-2 6-4.

“This time last year I was ranked around 200 and now I’m close to being seeded,” said Barthel, making her Madrid debut. “It feels strange, but I worked hard for it.

The men begin play on Sunday, with the top eight seeds given a bye.

Rafael Nadal, seeded two, will get his first test on the unorthodox and experimental blue clay courts which have drawn the Spaniard’s anger when he plays the winner from the match between Croatian Ivo Karlovic and Russian Nikolay Davydenko on Sunday.