The Australian boys’ team is through to the quarterfinals of Asia/Oceania qualifying for the World Junior Tennis competition in Kuching, Malaysia. 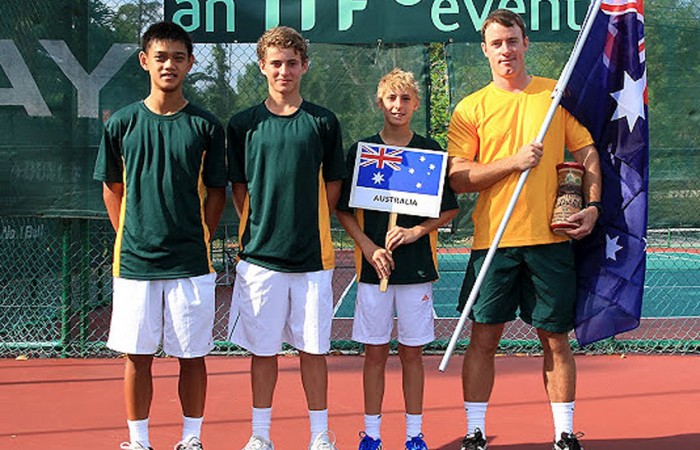 The Australian boys’ team is through to the quarterfinals of Asia/Oceania qualifying for the World Junior Tennis competition in Kuching, Malaysia.

Brian Tran (Greystanes, NSW), Oliver Anderson (Yeronga, Qld) and Scott Jones (Carramar, WA) have finished top of their pool and will need to win against seventh seeds Uzbekistan in order to qualify for the finals in the Czech Republic on 13-18 August 2012.

Earlier this week Australia posted a win over Hong Kong 2-1 in their opening tie, before the team really found their feet to outdo the host nation Malaysia 3-0. The team then dismissed sixth seeded Philippines 3-0 in their third round-robin match.

Leading an example for the team is 14-year-old Anderson, who has not lost a set yet this week.

“I’m playing well, feeling confident and I’m enjoying the battle in the heat,” he said.

“On the court I feel I can outlast my opponent physically and have been strong mentally. Making the quarterfinal is good but we still have a lot of work to qualify and three matches to win the whole thing.”

Scott Jones added: “I’m really excited that we have a great chance to qualify for the finals later in the year. It’s a great honour to represent Australia and continue the great tradition we have in Australian tennis.

“I’m enjoying playing for the team, and supporting each other, especially when we are such good mates.”

“The boys have done a great job to finish first in the pool. They took care of business and won the matches they were seeded to,” Bunt said.

“I think the country to beat here is Korea. They have a strong team, and will be a good challenge for the boys. Japan and Chinese Taipei are also looking good.

“The doubles is going to be very important, and this is an area the boys will have to lift on. The doubles are key for the boys to win this tournament.”

Australia will play their quarterfinal match this afternoon.

The World Junior Tennis competition is an ITF tournament for players aged 14-and-under. The top 16 boys’ and girls’ teams from regional qualifying compete for the title with over 100 countries represented in the opening stages of the competition.

The finals will be played in Prostejov, Czech Republic. Korea is the reigning boys’ champion.