Despite losing in the Asia/Oceania qualifying final against China, Australia's Junior Fed Cup team has gained valuable experience before the final in Barcelona. 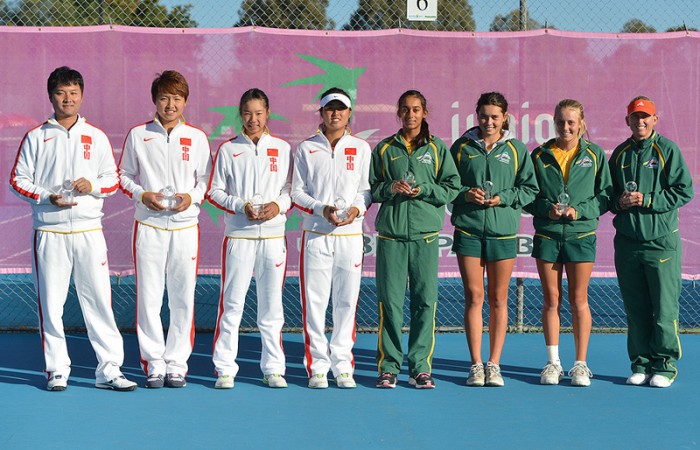 Experience will become a factor as Australia’s junior Fed Cup team set about defending the world junior title they claimed in 2011.

The team comprised of Naiktha Bains, Zoe Hives and Isabelle Wallace today finished runner-up to China in the Asia-Oceania final qualifying event in Bendigo, having earlier qualified for the world junior final in September by progressing to the quarterfinal stage.

“I’m very happy. I mean the goal was to qualify (for the final) and we did that,” said team captain Nicole Pratt. “To actually play against China in the final and actually I believe we could have won today.”

Claiming every singles rubber she’s contested so far in Bendigo, Hives once again underlined her strength in the Australian team with a 6-2, 6-3 victory over Qiu-Yu Ye, before Bains suffered a tight three-set loss to Yi-Zue Sun. The Chinese pair subsequently proved too strong for Bains and Hives in the doubles, winning 6-1 6-2.

Noting that the Asia-Oceania final qualifying is “such an important part of their overall development and learning”, Pratt said the final provided an important chance to take stock.

“The one thing that we need to do prior to the finals is we need to do a little bit more work on our doubles play and really have potentially a set combination,” she explained.

While working on the team’s skill development, Pratt has been thrilled with the girls’ positive demeanour.

“I think this group of kids they’re a great group of kids in terms of their attitude, their work ethic and their ability to enjoy the moment is great. I know that everyone is really looking forward to Barcelona,” she said.

The joint success of Australia’s junior Davis Cup team progressing to the final in Barcelona provides an added bonus.  “It’s just a great team atmosphere. I think the guys were secretly cheering us on in that quarterfinal because they wanted some company in Barcelona,” Pratt said.

Last year, Australia’s junior Fed Cup team of Ashleigh Barty, Brooke Rischbeith and Belinda Woolcock claimed the final in Mexico, which sets a high standard for the team which will travel to Barcelona for the September 25-30 final.  China, Korea and Japan were the other junior Fed Cup teams to qualify from the Asia/Oceania region.

“I think the bar was set last year when Australia won so that’s big shoes to fill,” Pratt acknowledged, adding the team to represent Australia in Barcelona will be named closer to the tie.

“At the end of the day, if these three girls get the call up, I think they can do Australia proud.”