Despite serving for the match in the second set, Sam Stosur has gone down in a torrid three-hour quarterfinal battle against Maria Sharapova in Stuttgart. 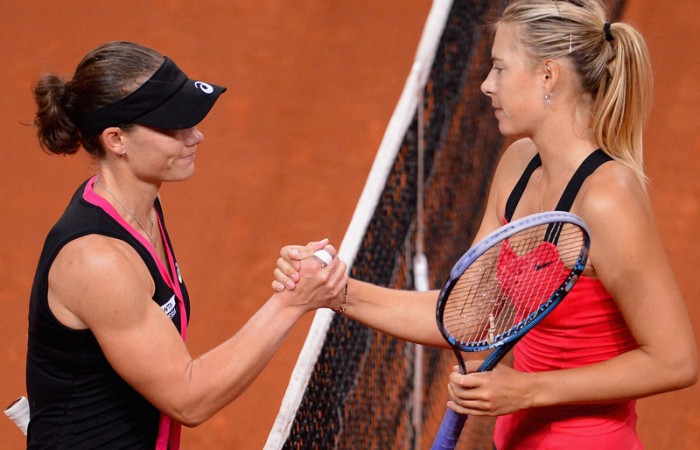 Samantha Stosur came unstuck once more against Maria Sharapova to bow out of the WTA Porsche Tennis Grand Prix in Stuttgart, but not before stretching the triple Grand Slam champion for more than three hours.

Australia’s US Open Champion went down 6-7(5) 7-6(4) 7-5 in a high-quality encounter that produced just three breaks in 36 service games.

Having won the first set tie-breaker, Stosur served for the match at 5-4 in the second only for Sharapova to hit back to claim victory and advance to the semis after three hours, one minute on court.

“It sucks to lose but, when you play as well as I did tonight, you can’t be too hard on yourself,” Stosur said.

“It was a very good match, we both played well and there wasn’t much in it. Towards the end of the third set, she started serving very well and put me under pressure to get the only break point.

“The last game was the cherry on top for her, winning at 40-0 with some very good serving.”

Sharapova hit 11 aces, compared to Stosur’s seven, and as the quarter-final finished at just before 2300 local time.

The Russian said recovery was her main concern ahead of her semifinal against third-seeded Wimbledon champion Petra Kvitova, who beat Germany’s Angelique Kerber 6-4 6-4.

“She (Stosur) has a great serve and she served as well as she ever has against me,” said Sharapova.

“It was pretty difficult to play against her, so I am very happy with the win. It’s not over until the last point has been played and you’ve shaken hands.

“She had her chances to win, so I am just happy to have reached the last four. I have a second chance now and I intend to use it.”

In the other semifinal, top seed and world No.1 Victoria Azarenka will play fourth-seed Agnieska Radwanska of Poland.

All of Radwanska’s four losses this year have come at the hands of Azarenka and having also reached the semifinals here last year, the Polish No.1 said it takes a special effort to beat the world’s top female player.

“You have to be at the top of your game and play some great tennis to beat her,” admitted Radwanska.

Having already beaten ex-world No.1 Ana Ivanovic and seventh-seed Marion Bartoli on the way to the quarters, Barthel put up another battling performance to take the match to three sets.

This was Azarenka’s fourth win over the 21-year-old German this year.

Radwanska booked her place in the semis by beating French Open champion Li Na of China 3-6 6-2 6-3.

The Chinese struggled to cope as Radwanska raised her game with a series of drop shots and strong returns in the second set before carrying her improved form into the third.

With Roland Garros to start on May 27, Radwanska said she was enjoying finding her feet on clay courts as she bids to win her first grand slam title.

“I am enjoying my tennis and just trying everything at the moment, which probably worked against me in the first set,” said the 23-year-old, who claimed her ninth tour title at Miami recently.

“I was more calm in the second set and I am just happy I could turn things around. I just hope this is my year, so I can take the next step.”