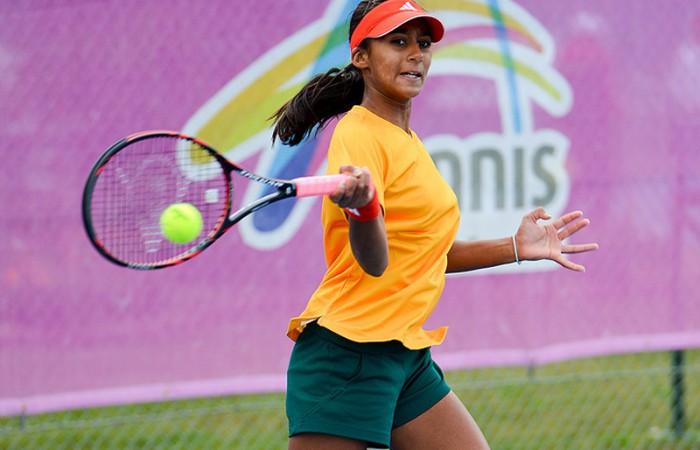 In progressing to the semifinals of the Asia/Oceania final qualifying event, Australia’s junior Fed Cup team had already achieved the major objective of qualifying for the world junior final in September. Today there was an added bonus as Zoe Hives, Naiktha Bains and Isabelle Wallace claimed singles and doubles rubbers to defeat Japan 3-0 and progress to the final in Bendigo.

Hives once again got the team off to a winning start with a gritty 6-2 7-6(2) win over Nozomi Ohya. Bains followed with her most emphatic Bendigo performance yet, claiming a 6-4 7-5 victory against Mami Adachi. She then combined with Isabelle Wallace to defeat Adachi and Hosonuma 5-7 6-1 6-4 in the doubles.

Team captain Nicole Pratt was delighted to see the team progress so strongly after yesterday’s quarterfinal win over India came down to the third set of the doubles.

“Zoe and Naiktha both getting through in the doubles, the confidence (was) high,” Pratt said. “I think that’s when you’ve got to put your two most confident players in and I’m just really pleased today for Isabelle, she played fantastic in the doubles today.”

That progress highlights the importance of the team event in each young player’s career. Hives, winner of the Queensland Junior ITF International in Bundaberg earlier this month, has played a key role claiming straight-sets victories in all five singles rubbers she’s contested in Bendigo.

“It’s just so good,” said Hives, who is as quietly spoken off the court as she’s competitive on it. “It’s pretty much amazing.”

Pratt is thrilled to see Hives stepping up in the team setting. “I honestly didn’t know who was going to be playing singles. It was very much about sharing the load but you know Zoe, she’s taken that number two spot and really owned it,” she said.

For Bains, the power of a positive attitude became clear as she claimed hard fought wins over Singapore’s Rheeya Doshi and Malaysia’s Choo Lyn Yuen in the round robin stage, and bounced back from her loss to India’s Rutuja Bhosale with a confident win today.

“I tried to stay positive as much as I can and got the best result, so I was happy with that,” she said.

Responding to pressure proved the key for the youngest member of the team. “She showed glimpses of that throughout the week but hadn’t been able to put it all together and today she put it all together when she needed to so that was a good effort for her,” Pratt said.

With the team steadily improving in form throughout the week, tomorrow’s final against China will provide the chance to turn the tables after a 1-2 loss to the second seeds in the round robin stage.

“I think that’s the benefit of a format like this is that I think the best teams come through at the end after getting some matches under their belt,” Pratt said. “Playing against China again and hopefully (we’ll get) a little bit of revenge.”

Win or lose, the final will be important experience as Australia looks to claim the world junior title for the second consecutive year.

“At the moment we’re just thinking about the here and the now but certainly the girls are excited to go to Barcelona,” Pratt said.

“It’s a different surface and the European countries are very, very strong. I think it will be an unbelievable effort to defend but we’ll certainly go across and give it a try.”