After falling to Julia Goerges in last year's semifinals, Sam Stosur this time beat the defending Stuttgart champion to set up a clash with Maria Sharapova. 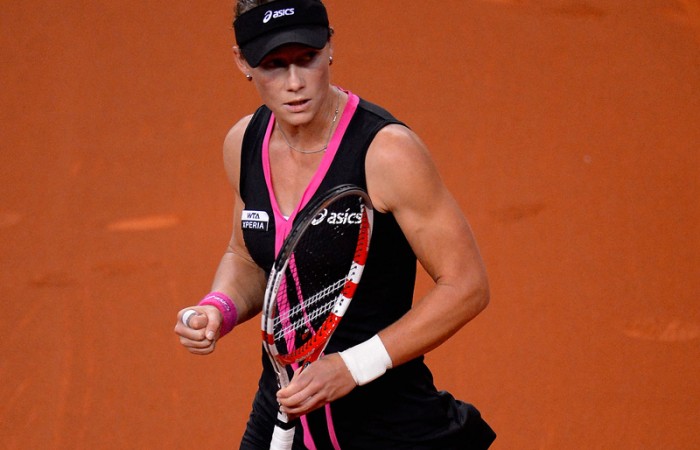 Samantha Stosur has continued her recent run of beating Germans in their own patch, downing defending champion Julia Goerges at the Stuttgart WTA tournament to set up a quarterfinal meeting with world No.2 Maria Sharapova.

In a repeat of last year’s semifinal, Stosur was taken to three sets by Goerges in Thursday’s second-round clash before the US Open champion dug deep for a 6-2 2-6 6-3 victory at the indoor claycourt tournament.

It came off the back of Stosur’s dual triumphs on the same court over the weekend, the world No.5 logging straight set defeats of Angelique Kerber and Andrea Petkovic in Australia’s Fed Cup tie against Germany.

“I started well and thankfully I then got through the third. Clay still works very well for me,” said Stosur, the French Open finalist from 2010.

It was Stosur’s first win against Goerges in three meetings.

Meanwhile, top-ranked Victoria Azarenka of Belarus advanced to the quarterfinals when Andrea Petkovic was forced to retire after picking up another in a long list of serious injuries.

Azarenka was leading 6-2 4-4 when the German stepped awkwardly and twisted her right ankle and had to give up. Petkovic didn’t even try to continue playing and had to be helped off the court.

Ranked No.11 in the world, Petkovic was in the second match of her comeback after injuring her lower back in January.

In other results, wildcard Mona Barthel claimed her second top scalp of the week to also reach the last eight as she knocked out seventh seed Marion Bartoli.

The 21-year-old German, who blasted down 11 aces to out-muscle ex-world No.1 Ana Ivanovic on Wednesday in straight sets, needed just 71 minutes to beat France’s Bartoli 6-3 6-1 as she hit a further seven aces.

There were few problems for French Open winner Li Na, the eighth seed, who beat Akgul Amanmuradova of Uzbekistan 6-4 6-4. The Chinese will play Poland’s Agnieszka Radwanska in the quarterfinals.

Wimbledon champion Petra Kvitova had an easy 6-2 6-2 win over Italy’s Francesca Schiavone to set up a last eight match against Angelique Kerber, who demolished former world No.1 Caroline Wozniacki 6-1 6-2.