Australia's Junior Fed Cup team has qualified for final in Barcelona after a thrilling defeat of top seeds India which came down to a live doubles rubber. 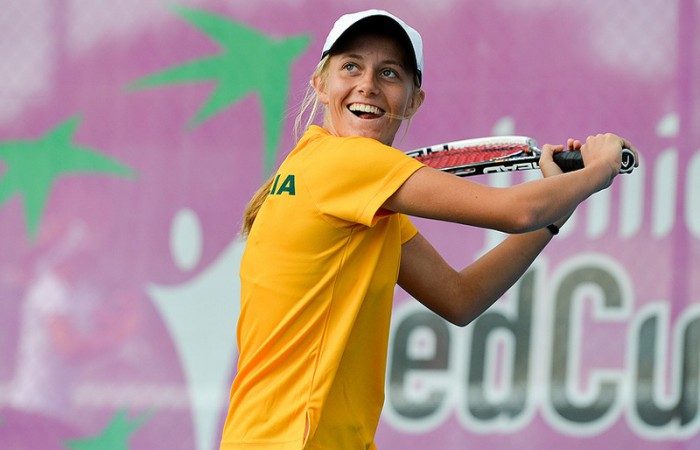 A proven ability to perform under pressure is one quality the Australian junior Fed Cup team can confidently take into September’s final, after their quarterfinal victory in the Asia/Oceania final qualifying event came down to the third set of the doubles in Bendigo today.

Zoe Hives and Naiktha Bains combined superbly to claim the crucial doubles victory over the top-seeded Indian combination of Rutuja Bhosale and Snehadevi Reddy 2-6 6-4 6-3, to seal the quarterfinal and therefore Australia’s progression to the final in Barcelona.

“I’m excited for the girls, they really fought hard,” said team captain Nicole Pratt. “They came from behind and it’s always good when that happens.”

Admitting there was some risk in the first-time doubles of Bains and Hives, Pratt suffered a nervous period on the sidelines after the Australians dropped the first set and after levelling with a second set win, suffered an early service break early in the third to trail 1-3.

Experience as captain and a former player ultimately showed, however, when Bains and Hives immediately broke back, then went on to claim the crucial victory.

“I just felt like they were the two most confident players to have going into the decider. It fortunately worked out,” Pratt said.

Hives is proving a powerful performer in Bendigo, the determined competitor claiming straight-sets singles victories in every round robin stage and another important 6-1 6-1 victory over Reddy to get the Australians off to a winning start against India today.

The 16-year-old Victorian couldn’t be more delighted with her role in taking Australia to the final.

“I’ve just been playing well and playing solid. I haven’t lost one yet, so it’s been good,” she said.

Bains suffered a 7-6(5) 6-2 loss to Bhosale in her singles match, but having maintained her positive outlook and showed leadership in the nail-biting doubles win, Pratt  says it’s easy to forget that the Queenslander is still just 14-years-old.

“It’s kind of scary actually. I have to remind myself sometimes. She was really excited at the start of the week. Not only just to qualify for Barcelona but she was the one saying ‘we’re going to win, we’re going to win’. It’s great to have that young enthusiasm about,” Pratt said.

Australia meets Japan in tomorrow’s semifinal and while the team has already achieved the most important goal of qualifying for Barcelona, it seems the team’s intensity will be unwavering.

“I felt anything after (qualifying for the final) is a bonus so now we’re in bonus and play Japan,” Pratt said. “Even though India were the number one seeds I always felt like Japan are a really solid team. To play them in the semis is really going to be no different than India today.”

Having watched all three players lift a level this week, Pratt is feeling justifiably confident in her team.

“As soon as you put the green and gold on to play, it changes everything and it sort of defines people’s characters,” she said. “It defines whether they are willing to be a team, basically, because that’s the only way that we’ll win this competition.”