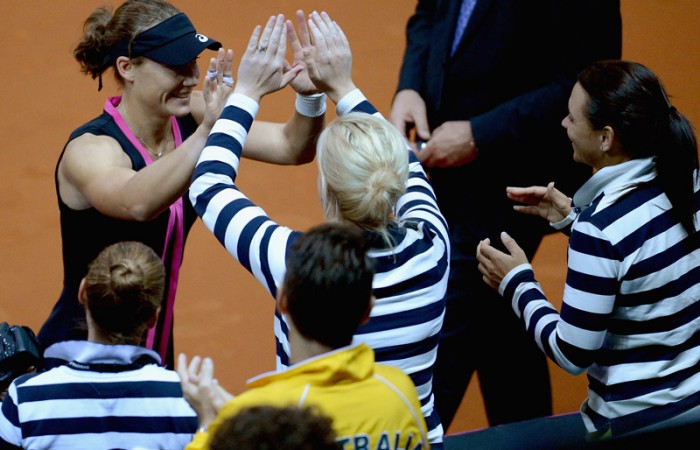 Samantha Stosur has hauled Australia back into the Fed Cup top-flight with a 6-4 6-1 victory over Germany’s Andrea Petkovic in Stuttgart.

Stosur backed up her opening day straight-sets win over world No.14 Angelique Kerber to dismiss the returning Petkovic in one hour and 14 minutes on indoor red clay at the Porsche Arena.

The win handed Australia an unbeatable 3-0 advantage in the tie and secured the nation a berth in the elite eight-nation World Group next year.

After Stosur wrapped up the tie, Olivia Rogowska lost to Kerber 6-3 6-3 before Julia Goerges and Andrea Petkovic defeated Gajdosova and Casey Dellacqua 6-3 6-4.

Stosur entered the weekend with a 1-5 record this year against top-20 players following a mixed start to 2012.

However the combination of the European spring and red dirt under her feet again proved agreeable as the 2010 French Open finalist produced two impressive wins before Roland Garros next month.

Following Gajdosova’s shock win over Julia Goerges on the opening day, the Germans decided to replace Goerges with world No.11 Petkovic on Sunday.

It was a gamble considering that Petkovic had not played a match for three months because of back stress fractures, and the home girl was not able to cope with Stosur’s game in front of a parochial German crowd.

“Everyone is of a high standard with only eight (nations in the World Group) but I think we are as good as any and we look forward to playing some big ties,” he said.

“I think a year ago we had our worst loss in some time (against Ukraine) and this time we have had our best win in quite some time.”

Not that Stosur’s form was the only good news for Australia with Jarmila Gajdosova enjoying a morale-boosting 6-4 6-4 win over world No.16 Julia Goerges.

“That was a terrific performance by Jarka, that sort of result takes the pressure off Sam feeling that she has to win all her matches,” Taylor said.

After Stosur wrapped up the tie, Olivia Rogowska lost in her debut Fed Cup match to Germany’s No.1 and world No.14  Anglique Kerber 6-3 6-3.

Goerges and Petkovic then defeated Gajdosova and Casey Dellacqua 6-3 6-4 in the doubles, which saw Australia win the tie on the final rubber score on clay 3-2 to Australia.

On day one of the tie Stosur recorded a comfortable opening day win over an in-form Kerber 7-6 (1) 6-4 while Gajdosova enjoyed a 6-4 6-4 win over Goerges.