Rafael Nadal won the Monte Carlo Masters for an unprecedented eighth straight year on Sunday, defeating world No.1 Novak Djokovic 6-3 6-1 in the final. 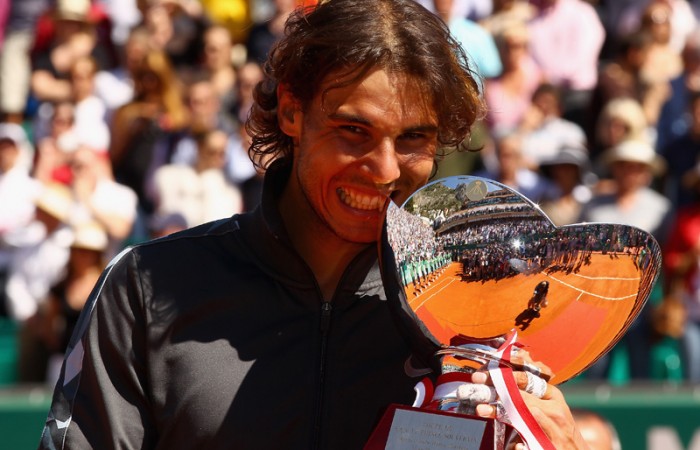 Rafael Nadal won the Monte Carlo Masters for an unprecedented eighth straight year on Sunday, defeating world No.1 Novak Djokovic 6-3 6-1 in the final.

The victory also marked the end of a seven-match losing streak in finals to the Serb world No.1, whose last victory over Nadal came in a six-hour Australian Open final.

Nadal’s victory was his 42nd in a row at the Mediterranean venue and marks his 47th career trophy and 20th in a Masters 1000 tournament, the first to achieve that honour.

“I had lost to Novak seven times, so losing eight would not have been much different. But to win this one makes a big difference.

“Hopefully I will stay healthy and go to Barcelona (next week) and play a good tournament.”

Djokovic won the first game of the match to love but slowly found himself losing grip at the cliffside club on the shores of the Mediterranean.

Djokovic, who also played and lost the 2009 final against Nadal, and was competing this week after learning of the death of his grandfather in Serbia. He had rallied from a set down in two of his four previous rounds.

The Serb world number one was playing in his 45th ATP final and now stands 30-15. He trails Nadal 14-17 in their career series. Monte Carlo is one of only two Masters 1000 tournament that Djokovic has not won (Cincinnati is the other).

“I’m sorry for my performance today, Rafa played well and deserved to win today,” said Djokovic, who went down in 78 minutes. “I’m still very happy to reach the finals for the second time.

“This is one of my favourite events at the most beautiful centre court in the world.”

Djokovic stands 24-3 on the season with titles at the Australian Open and Miami.

Nadal advanced as he fired his only ace of the final on match point after saving the lone break point he had faced two games earlier.

The Spanish winner now owns a 44-1 record in the principality, with titles in eight of his nine appearances.