Harry Bourchier and Ellen Perez are the 2012 Gallipoli Youth Cup champions after defeating their opponents in hard fought matches in Ipswich, Queensland. 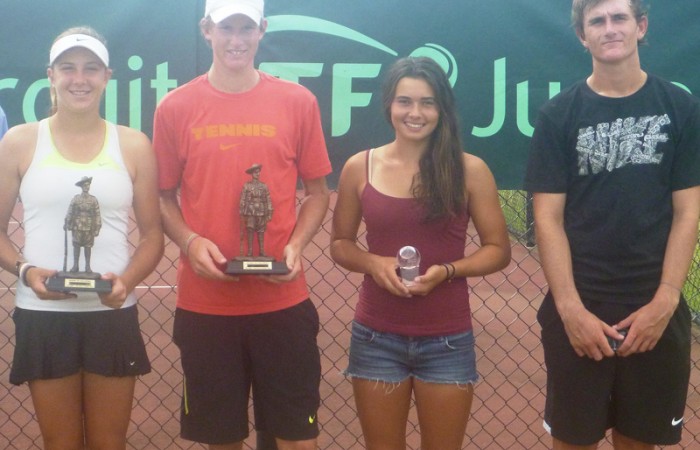 The win tops off a big month for the 16-year-old, who also took out the Optus 16s National Claycourt championships at the beginning of April. His world junior ranking is now expected to improve again considerably as he prepares for the European claycourt season.

“I’m really happy with the win. Brad knows my game really well, we play doubles together and we travel together so it was tough to play him but I did the job,” said Bourchier.

“I’ll now take some time to rest before I head to Europe. I’m really hoping I can play French Open juniors so we’ll see how I go in the first couple of weeks overseas.”

Perez, 16, had a magical week of tennis, not losing a single set after ousting Kimberly Birrell (Hope Island, Qld), No. 3 seed Louise Oxnevad from New Zealand and No.15 seed Priscilla Hon (Rochedale, Qld) on her way to the final. Sara Tomic (Southport, Qld) also performed strongly this week before Wallace out powered her 3-6 6-4 6-4 in the semis.

“I got off to a slow start but I served well in the big points and the important points. I was really happy with my attitude, I was really calm and stuck to my game plan,” said Perez.

“I’m trying to get my ITF junior ranking up so I’m looking to play some ITF pro circuit events overseas over the coming months.”

Bourchier and Perez also enjoyed success in their respective doubles finals, with Bourchier pairing with Mousley to secure another doubles title over [2] Robert Allan (Mullaloo, WA) and Nicholas Horton (Terrey Hills, NSW) who were forced to retire early in the second set with scores at 6-4 2-1.

The Gallipoli Youth Cup encourages the younger generation to proudly and uniquely carry on the tradition and values inherited from the soldiers who fought at Gallipoli, keeping the ANZAC spirit alive.

First held in 2008, the Gallipoli Youth Cup was set up by founder Umit Oraloglu and Australian tennis legend and tournament ambassador Pat Cash, in partnership with Tennis Australia.

The tournament marks the end of the Ipswich Festival of Tennis, a seven-week event which has featured the City of Ipswich Tennis International and the Optus National Claycourt Championships for the 12/u, 14/u and 16/u age groups.