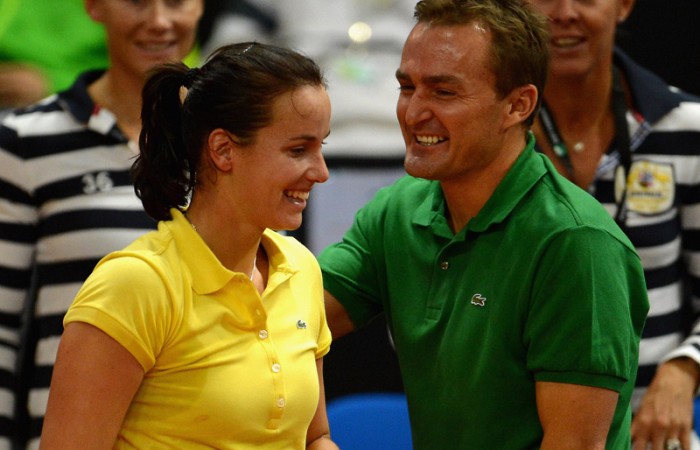 However it was Jarmila Gajdosova’s victory that was the real surprise, the former Slovakian having endured a torrid time on the court since Wimbledon last year.

Gajdosova defeated Julia Goerges, currently the world No.16, 6-4 6-4 in one hour and 26 minutes, a season-best result in which her powerful ball-striking proved too much for the German to handle.

Coming into the tie, Gajdosova had recorded a meagre 12-19 win-loss record since reaching the third round at the All England Club in 2011, and since cracking the top 25 in May that year, her ranking has slipped to No.50.

She had won just two matches against top 100 opponents prior to Saturday, her best result being a three-set defeat of then No.24 Yanina Wickmayer at Indian Wells.

In contrast to the Aussie’s struggles, Goerges had won the WTA tournament at the same Stuttgart venue 12 months ago and was a hot favourite to level the tie.

Yet Gajdosova managed to hand the touring team a second valuable point thanks to her win.

Australian Fed Cup captain David Taylor credited Stosur for her “mature” performance against Kerber but said that Gajdosova had exceeded his expectations.

“We are all excited for Jarka. That performance should really give her confidence a lift,” he said.

“I think Julia was tight from the beginning … (but) to say Julia lost because of nerves, I think that’s not correct, I think Jarka played too good and played a great match.”

Gajdosova, too, was extremely pleased with her performance.

“She’s No.16 in the world, so on paper and everywhere else she was expected to win, so I can just be happy that I played well and helped the team to get a second point,” she said.

“I really like the court, I think the whole surface is really good and suits me and I enjoy playing on it.

“I don’t think I could have done better than I did today.”