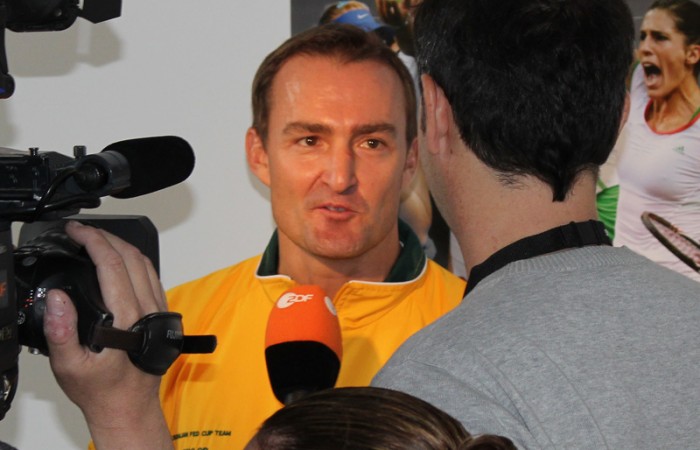 Australia Fed Cup captain David Taylor believes that Sam Stosur can handle the weight of expectation being placed on her in their Fed Cup World Group Play-off tie against Germany this weekend.

With the other members of the Aussie team ranked far lower and going into their matches as underdogs, good performances from world No.5 Stosur are necessary to give Australia any chance of upsetting their impressive opposition away from home.

Taylor, who also serves as Stosur’s coach on the WTA Tour, said his charge was used to dealing with this kind of pressure.

“She has been a top player for quite some time now,” he said.

“She’s got a lot of experience and has played a lot of big matches, and I think that really helps for a situation like Fed Cup where there is so much pressure involved.”

Stosur will receive enormous encouragement from her teammates on the sidelines during her singles rubber against world No.14 Angelique Kerber, the first match of the tie at Stuttgart’s Porsche Arena.

Taylor said the Australian girls were an extremely tight-knit group who supported each other very well.

“They’re all very friendly, we have a great team spirit … (there are) no prima donnas,” he said.

“I think they really all come together for each other. If we need a certain player to do a certain type of drill to complement the other girl, no-one has any hesitation in helping, and it’s (always) a great week (when we play Fed Cup).”

Kerber will represent a tough challenge for Stosur. Already the winner of two titles in 2012 – she was victorious in Copenhagen last week over Caroline Wozniacki in the final – the German is a rapidly improving player who has shot up almost 100 places in the rankings in just eight months.

A major reason behind that rise was her run to last year’s US Open semifinals, where Stosur stopped her in three sets before going on to win the title.

Taylor said that the German’s left-handed game matched up well with most opponents, with her powerful cross-court backhand and off-forehand in particular giving other female players plenty of trouble.

He said he was not surprised by Kerber’s recent success, but hoped Stosur’s big-match experience would pay dividends when the pair did battle on Saturday.

“That semifinal at the US Open was a very important match – I think Angelique had nothing to lose at all, (while) Sam had a lot to lose, but Sam came out on top, and I’m hoping that will count for something,” he said.