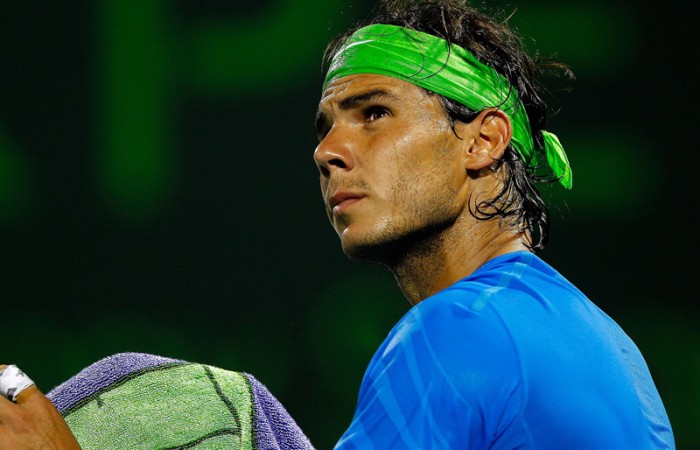 The Spaniard takes to the European clay for the first time this year having spent the past fortnight trying to heal his latest knee problems after failing to front up for his Miami hardcourt semifinal against Andy Murray.

Nadal will be seeded second in the field at the picturesque Monte Carlo Country Club, with No.1 Novak Djokovic keen to make his return to the Mediterranean venue after skipping last year to rest.

Six-time French Open champion Nadal truly owns this tournament, which starts on Sunday, having lost a mere six sets in total since starting his unbroken title run in 2005.

Over the past five years, he has dropped just two sets at the elite club.

“It is painful and I have to stand it for a week but it works. I know I have to in order to recover faster,” he said, adding that his knee tendons were “better than before” when compared to his 2009 condition.

In the absence of Roger Federer, Britain’s Andy Murray will be seeded third as he tries to lift his spirits after going down to Djokovic in the Miami Masters final.

Murray is defending one of his career-best performances on clay after reaching the semi-finals in two of the last three Monte Carlo editions.

He lost to Nadal a year ago in the final four.

Now coached by Ivan Lendl, the 24-year-old remains in fourth place in the ATP rankings and is still without a grand slam title.

“I have to believe that I can win the French Open,” proclaimed the Scot. “Last year (reaching the semifinals) gave me a lot of confidence.

“I wouldn’t say I’m the favourite going into the French because Djokovic, Roger and Rafa have got much better results than me on clay. But I think I can win against them. I need to work hard over the next five or six weeks, for sure.”

Missing from the field will be the third-ranked Federer, who will make his clay start next month at the Madrid Masters.

The Swiss, with three ATP titles this season, plus trophies from his last three events of 2011, is taking a training break and has called in American sparring partner Jesse Levine for a hit.

The Monte Carlo field has been hit by withdrawals.

France’s Richard Gasquet, who injured his ankle playing football, and compatriot Gael Monfils, with an abdominal muscle injury, are out.

American John Isner withdrew after helping the US to a Davis Cup quarter-final win over France at Monte Carlo last weekend.

Isner elected to return to the US to play in the Houston claycourt event and will remain in the country to train before returning to Europe.