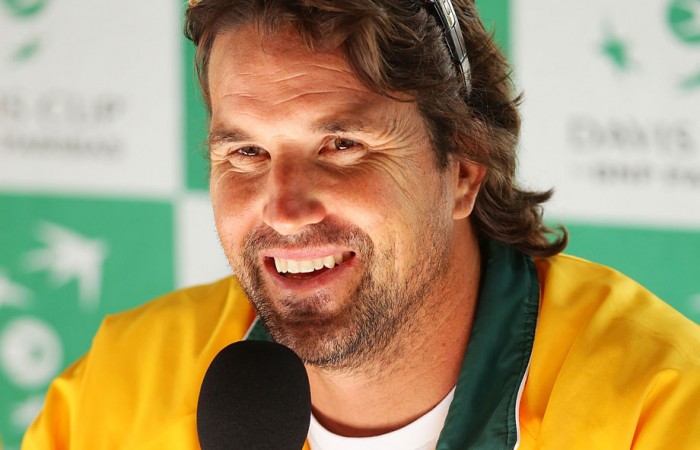 Australia was drawn to face Germany in Germany on Wednesday – the winner will earn a spot in the elite Davis Cup World Group in 2013, while the loser will return to their zone group.

“It was a tough draw to get Germany in Germany but by no means is it not winnable,” said Rafter following the announcement.

“Sure, we will go in as underdogs, but I back our guys to produce their best when representing their country. No one thought we would even come close against Switzerland in Sydney last year.”

Germany currently boasts six players in the world’s top 100, including No.20 Florian Mayer and No.34 Philipp Kohlschreiber.

Australia, led by Bernard Tomic, easily accounted for South Korea in Brisbane, sweeping the visitors 5-0 to set up their fifth World Group Play-off in the past six years.

Each time the Australians have come up short in their quest to return to the World Group, a position they last held in 2007.

“Don’t underestimate how much these guys want to win their way back into the World Group. We have already started planning for the September play-off and I am excited by the prospect of taking on the Germans on what I expect will be an indoor clay court.”

This time around the Australian team will be hoping that its most experienced campaigner, Lleyton Hewitt, will be back on court. The former No.1 is currently recovering from a toe injury that required surgery earlier this year. He is scheduled to make his return at the Campbell’s Hall of Fame Championships in mid-July.

Germany became Australia’s opponent after losing its first-round World Group tie to Argentina in February. The last time it found itself outside the World Group was in 2005.

The last time the two countries met was in the World Group quarterfinals in 2000, a tie that Australia clinched three rubbers to two on grass at Adelaide’s Memorial Drive en route to the final.

“Australian Davis Cup teams have a tradition of passion and toughness. We have an opportunity to add to our nation’s impressive history in this competition.”