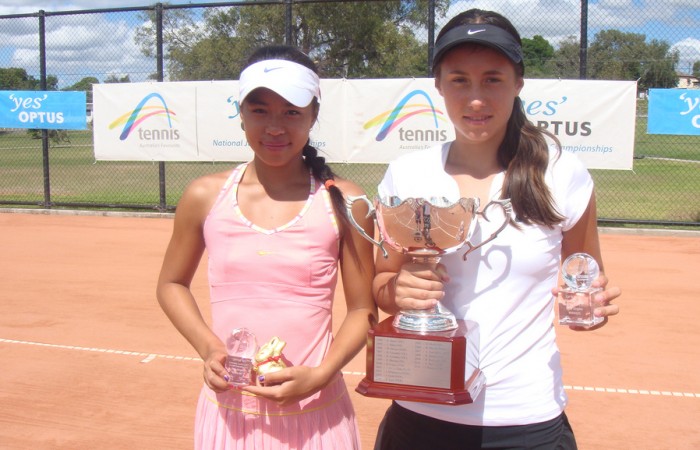 In the girls’ event, Tomic cruised through the final defeating No.2 seed and doubles partner Lizette Cabrera (Townsville, Qld) in straight sets 6-2 6-2.

The Queenslander had played a series of long three-set matches en route to the last round, and was delighted with her result and the way she played on Sunday.

> View photos of the winners

“It’s a good feeling, I felt great on court and I’m really happy with the win. It’s really hard to play one of your best friends,” said Tomic, who is currently ranked No.75 in the Australian rankings.

In the boys’ singles final, Purcell recovered from a set down to defeat No.1 seed Brian Tran (Greystanes, NSW) 3-6 6-4 6-3, capturing his first title in 2 hours and 25 minutes.

Purcell led the head-to-head count 2-0 against Tran leading into the match and was able to capitalise on his past performances to win his first championship.

“I’m stoked to win my first title. It was a pretty grinding match and we both played relatively well,” said Purcell.

“I’ve played Brian twice before, with each match going to three sets and going my way.”

Like Tomic, Purcell will compete in the Queensland Junior Claycourt International in Bundaberg this week, as he aims to compete in Europe and win a second national junior title.

The Optus National Claycourt Championships will continue on Tuesday 10 April with the start of the Optus 12s event.