Spain's Nicolas Almagro and David Ferrer demolished Austria on the opening day of their Davis Cup quarter-final on Friday. 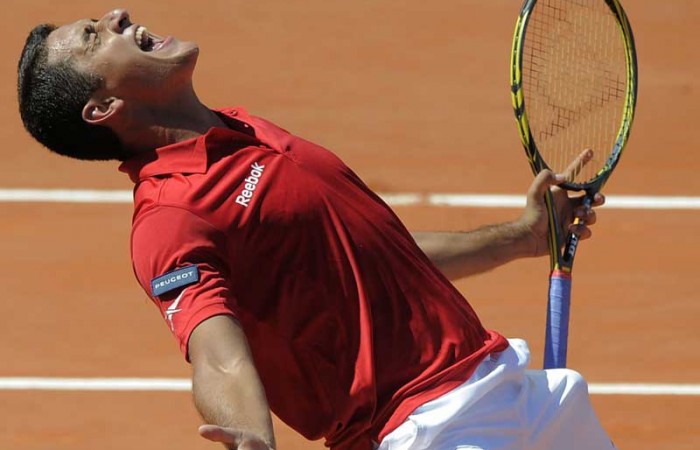 Spain’s Nicolas Almagro and David Ferrer demolished Austria on the opening day of their Davis Cup quarter-final on Friday as the five-time champions moved to the verge of the last four.

“I think I played one of my best matches in Davis Cup,” said Almagro, as Spain chase a first win over Austria since 1979.

“The score was easy but the match wasn’t. I had to fight for every point and I think I was more focused than him. I beat a great player in a great competition.”

Ferrer eased past world No.139 Haider-Maurer, who hadn’t played a match since a Challenger tournament in February.

The Spaniard took his Davis Cup singles record in Spain to 13-0 as Austria’s first quarter-final appearance in 17 years turned sour.

“I won relatively easily and am happy with my game,” said Ferrer. “Maybe the opponent played a little bit bad and made many mistakes but I played very solid and consistent.”

Doubles team Marcel Granollers and Marc Lopez can wrap up victory for the defending champions ahead of time if they can see off Oliver Marach and Alexander Peya on Saturday.

Victory in the tie would also extend Spain’s winning record at home to 23 matches, a run stretching back to 1999 when they lost to Brazil. That defeat was also Spain’s last on a clay court in the competition.

The winners of the quarter-final will face either France or the United States in the semi-finals.

Isner, the world No.11, had shown his Davis Cup ability in the first round with a shock win over Swiss star Roger Federer which also came on clay.

He followed that up by beating world No.1 Novak Djokovic in the Indian Wells semi-finals last month.

“When I got up this morning I felt it was going to be a beautiful day for me and that’s how it turned out. I played very well, simple as that,” said Isner.

In Prague, 2010 champions Serbia, playing without Djokovic, slipped 1-0 down to the Czech Republic after Tomas Berdych eased past Viktor Troicki 6-2 6-1 6-2.

But the players then refused to shake hands at the net with some media reports suggesting that Tipsarevic had accused Stepanek of giving him the finger.

The winners of that quarter-final will face either Argentina or 2005 champions Croatia who were 1-1 in Buenos Aires.

Argentina, last year’s runners-up, hold the unwanted record for reaching the most Davis Cup finals without winning the title, having now fallen in four finals.

The last time Argentina lost a home tie on clay was against Slovakia in 1998.