Isabelle Wallace and Harry Bourchier have claimed the singles titles at the 2012 Optus 16s National Claycourt Championships in Ipswich. 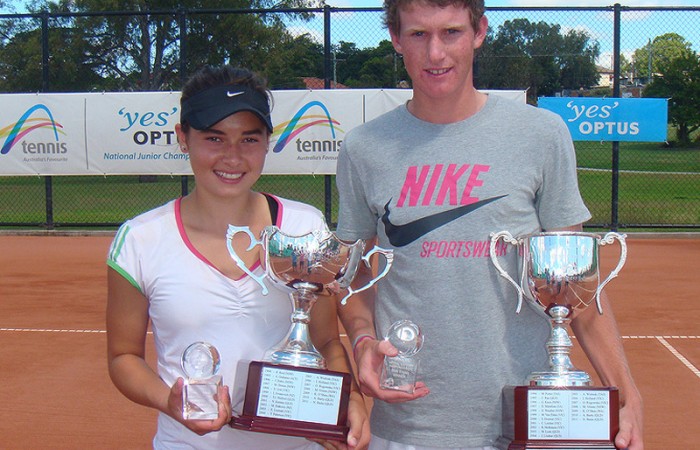 “I’m really proud of myself for winning the title this year,” said Wallace, who is currently ranked No.60 in the Australian Rankings.

“I thought I played really well. I went 2-0 up in the first set and kept playing my game throughout the match. I was lucky to come away with the win today.”

“I felt really good out there on court. I didn’t let him [Jake] into the match at all. I’ve got a lot of confidence now moving into some upcoming events,” said Bourchier.

“I plan to compete in the ITF tournaments here in Queensland and then I’ll head to Europe in the middle of the year, which I’m very much looking forward to.”

In the finals of the doubles event, [1] Wallace and partner Brigitte Beck (Point Cook, Vic) were stunned by No.2 seeds Andrea Dikosavljevic (Sippy Downs, Qld) and Jaimee Gilbertson (Doonan, Qld) 6-4 6-4 while Bourchier made it two from two leading his partner Jordan Smith (Castle Hill, NSW) to victory over Lachlan McPhee (Camp Mountain, Qld) and Mitchell Robins (Hamilton, Qld) 6-0 6-1 to win the boys’ title.

The Optus National Claycourt Championships will continue in Ipswich this week, with the 14s event beginning tomorrow.

These tournaments offer points across the 12/u, 14/u and 16/u age groups, with select tournaments also offering points in the 18/u age group.  In total, 211 tournaments across Australia will make up the Optus Junior Tour in 2012, giving all juniors the opportunity to obtain an Australian Ranking.