Sam Stosur overcame a set and 5-2 deficit to eventually defeat the unseeded Chanelle Scheepers, setting up a fourth round clash with Serena Williams in Miami. 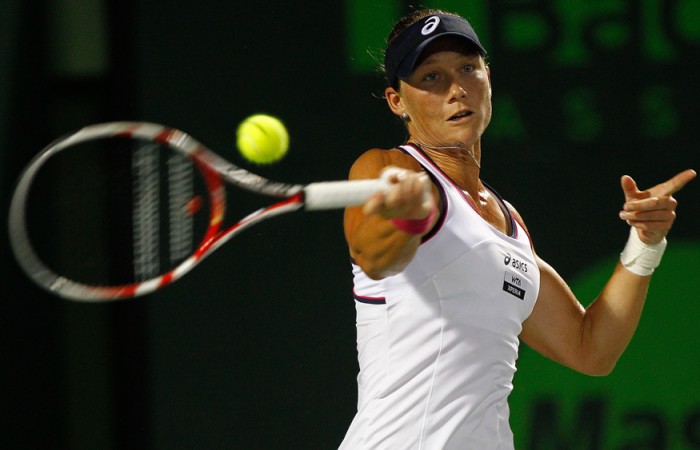 All the stats pointed to Chanelle Scheepers being a solid test for Sam Stosur, but nothing too taxing. You can’t rely on stats in this game, though. Because on a cool night in Miami, Scheepers took Stosur to the brink of defeat, forcing the reigning US Open champion to claw herself back into the match to win 2-6 7-5 6-2.

Going into this second-round clash the pair had met four times before, their head-to-head series tied at two apiece. But, crucially, Scheepers had never defeated a player inside the top 25 and with Stosur ranked at No.5, it seemed a tall order for the South African world No.42.

Yet Scheepers came onto court and played the match of her life, seemingly incapable of missing for the first set and a half.

For Stosur, it was a frustrating night. A solid opening service game concealed what was to come. Both women held serve until the fifth game of the match, when Stosur surrounded a tame break with a double fault – her sixth in just three service games. Just as worryingly, her groundstrokes were yet to find their range against a player who quite simply refused to miss.

One break was survivable, but two?

Stosur’s frustration was palpable towards the end of the first set. Shots she normally dispatched with ease were flying inches out, and Scheepers was chasing everything down. In the end, the South African sealed a comfortable first set win.

The second set was a chance to wipe the slate clean and start again. It just didn’t start well. Another poor service game by her own lofty standards meant that the Australian was always playing catch up.

Crucially, she did start to settle. From that point on the serve got stronger and the ground strokes started to find their range. But Scheepers held strong. Stosur tested her serve in the next few games but couldn’t find a way through.

Then Scheepers broke to lead 5-2. For a moment all looked lost as the South African served for the match. But building a lead and winning a match are two different things, and the cracks began to show in her previously flawless game.

The toss went, she started to push the ball more and Stosur was able to pressure her on the serve.

It worked. A break for 5-3 was followed by a straightforward hold for 5-4. It was the turning point. Breaking to love before holding with ease, Sam had her nose in front for the first time in the set.

An imperious game at 6-5 sealed an easy break – but tough second set – and the world No.5 was suddenly in the ascendance.

The third set was a relatively simple affair, he US Open champion simply dominating the South African.

As Stosur raced to a 3-0 lead Scheepers appeared to be struggling with cramps, but the Aussie had also rediscovered her ‘A-Game’.

At 5-0 it looked almost over. Scheepers briefly rallied to bring the score back to 5-2, but on the South African’s next service game Stosur conjured up two match points.

She only needed the one before sealing a remarkable comeback victory.

“I think I got a little bit lucky,” Stosur reflected after her match.

“She maybe got a little bit tired, a little bit tight and probably a little bit nervous trying to finish the match and then I tried to draw on that. When I got to 5-5 I thought ‘okay, I’m in with a shot if I keep on digging deep and making as many balls as I can’. Thankfully I won that second set and got on a bit of a roll in the third.

“I was thinking that I keep trying to hang in there. You never know what can happen if you do just try and make one more ball. I didn’t feel like I was hitting the ball too bad but I was making lots of errors which obviously isn’t a way to win.”

There’s a re-run of the US Open final in store for Stosur next as she takes on Serena Williams.

“It will be great to play Serena again and for sure I’m going to hit the practice court tomorrow, work on a few things and hopefully come out and play a lot better.”