Stosur excited ahead of Olympics

Sam Stosur is keenly anticipating the Olympic tennis event, hoping to improve her record at the Games and excited to be a part of the Aussie team atmosphere. 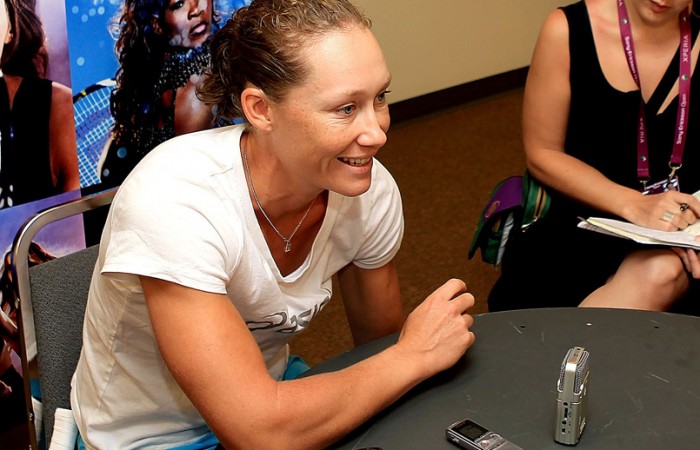 The tennis calendar is a regimented affair. The season kicks off in Australia, touches the Middle East before jumping over to the States, then Europe, back to the States and finishing off in Asia. Players know what they are getting and know where they are going to be.

But every four years something disrupts that regime: the Olympics. For one week of the year the best in world tennis step off the tour and focus on winning a medal that they can realistically only get their hands on three times – and if they’re lucky maybe four – in their careers.

This year in London Sam Stosur will be taking part in her third Olympic games.

“I’m really excited. Being part of the last two Olympics was a great experience for me. I’ve never done well at the Olympics but it’s a great week and one of the most exciting weeks you can have,” she said.

“I’m really looking forward to getting to London. This year is going to be a little more unique playing Wimbledon and then three weeks later being back there and playing again.”

When you talk to Stosur in press she’s usually very calm, occasionally erring on the side of understated. But when you get her onto the subject of the Olympics her excitement becomes palpable.

“With tennis you’re very rarely part of a team – apart from Fed Cup – and the Olympics is a time when you’re part of a team,” she said.

“You’ve got your tennis team that you’re always trying to support, but then you’re part of a greater team – I think the Australia Team has nearly 400 athletes and to be a part of something like that is very unique for us and unique to athletes from different sports and walks of life.

“They might be a lawyer or a physic and they are competing in their event and we’re tennis players all year round. You definitely learn a lot about what other people go through to get to that position in their sport.

“It is very inspirational to talk to these people and see what they go through to get there and, you know, they accomplished their dreams.”

And Stosur is going to do her best to soak up all of the atmosphere. For anyone who doesn’t know London, the tennis is taking place in southwest London at Wimbledon.

The main site of the Olympics, though, is out East near Stratford. That’s a good hour-or-so drive on a quiet day, or a few sweaty hours on a packed train (if the drivers aren’t on strike). Needless to say, Stosur would rather base herself where all of the Olympic action is, rather than be ‘isolated’ in the West London suburbs.

“I’m going to stay in the village. I couldn’t care whether it took me three hours to get to the tennis – it’s all part of it. The Olympics is some of the most exciting weeks I’ve had and I wouldn’t give that up to be able to walk to the courts.”

Of course, Stosur will be proudly wearing the green and gold in singles and doubles this year. That itself is something unique at Wimbledon – a club that would happily shoot you for wearing anything other than white.

But what about the new event at this year’s games, mixed doubles? Mixed is making its debut at the games, and Stosur is looking forward to it.

“Everyone is excited a trying to have another shot at winning a medal. With mixed any team can win. Sometimes the top seeds win and sometimes the wildcards. It’s great for us.”

And who would she partner? “Probably Bernie. We’re from the same city which is kind of a cool story. He’s a young player who can be very exciting to watch.

“Lleyton and I have played a few times at Hopman Cup and never won a match. But I don’t think that anyone has decided yet.”

Whatever happens and whomever she plays with, one thing is for sure – Stosur is excited about her Olympic opportunity and will be representing Team Australia with pride.