Stosur confident ahead of Miami campaign

Sam Stosur says she is focusing on one match at a time at the Sony Ericsson Open, and relishes the chance to play on courts that suit her big game. 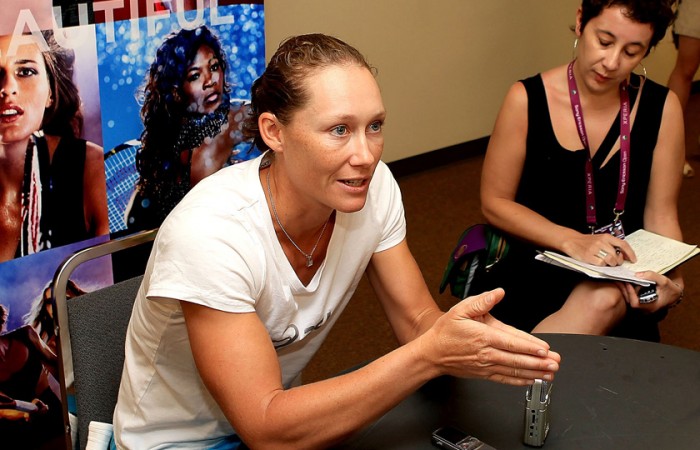 There are a lot of people who want to talk with Sam Stosur in Miami. Of course, Stosur has always attracted her fair share of attention. But at the WTA All-Access Hour she was one of a few seeds who commanded the absolute attention of all the journalists in the room.

Needless to say, her win at the US Open has something to do with that. But Stosur is seen as a genuine contender here despite being drawn in the same quarter of the draw as three former world No.1’s – Serena Williams, Kim Clijsters and Caroline Wozniacki.

But while much of the press attention is focused on a potential fourth round re-run of that 2011 US Open final against Williams, Stosur herself isn’t really thinking that far ahead.

“I’ll just take it match by match. It’s not like I’m trying to not look at the draw – you always find out eventually anyway,” she said.

Of course, should she negotiate her quarter things don’t get much easier. If it all goes according to plan elsewhere, she would face a likely semifinal against Maria Sharapova and a final against Victoria Azarenka. Undefeated so far in 2012 with a record of 23-0, Australian Open champion Azarenka is the defending champion in Miami, and has never lost to Stosur.

“Victoria has had the best year by far over every else. But the rest are behind her trying to get some of these titles – it’s still exciting times to be playing and watching,” Stosur observed.

Exciting perhaps, and at times for Stosur fans, nerve-wracking. That’s because 2012 has been a mixed bag thus far for the world No.5. After an Australian summer that she described as “very disappointing”, things have started to pick up:

“I was really pleased with the way I was playing in Doha and my first couple of matches in Dubai as well. Indian Wells last week wasn’t too bad, so so far it [2012] has gone quite well.”

Does that bode well for the next couple of weeks? Stosur seems to think it does.

“I think Miami can suit my game. It’s a little heavier here with the humidity so the balls maybe go through the air a bit slower. But the court surface is a good true surface and it gives me time to get around and hit the shots I want to hit,” she explained.

“In these conditions you’ve got to be really confident to go after it and swing and hit the ball as well as you want to otherwise it can fly and get away from you.”

We’ll be bringing you all of the Aussie action from Miami via Twitter (@tennisaustralia) and Facebook, helping you keep up to date with all the happenings at the Sony Ericsson Open.