Tennis Australia's Paul Moore recaps the highs and lows from his blog at Indian Wells, including great Aussie results amid an unfortunate viral epidemic. 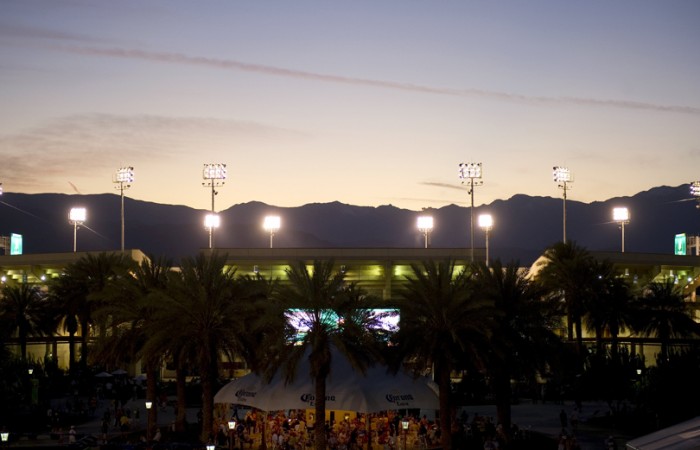 Don’t breathe in. That’s all you can do in situations like this. Breathing out? That’s fine. It’s just the breathing in that will get you. And that’s the only advice that you can give (or take) when there’s an airborne virus knocking people out left, right and centre. It starts with the shivers, works its way into your belly and then generally expunges itself in one direction or another (or both, if you’re particularly unfortunate). The good news is that it doesn’t last very long. The bad news is that when you’re a tennis player and your body is (in most cases) a finely oiled machine, something like that tends to put paid to your tournament.

At the 2012 BNP Paribas Open, that has unfortunately been the case for a number of players. On a sell-out middle weekend, a handful of matches were either rescheduled or cut short by players pulling out because of ‘the bug’. What’s more, it seems like it’s only just hitting its stride so who knows where it is going to strike next.

All in all, it’s a disappointing turn of events for one of the most popular tournaments on the tour. Everyone who comes to Indian Wells loves the event. A near-perfect climate, spectacular surrounds (think desert flats hemmed-in by snow-capped mountains), and some of the most loyal tennis fans on both the men’s and women’s tours give the BNP Paribas Open a very real claim to being the fifth Grand Slam. Not only is it one of the few non-Grand Slam tournaments that can boast sell-out crowds during its two-week run, it is also one of only two non-Slam tournaments that stretches out to a fortnight. That gives players the luxury of guaranteed rest days, and in these sleepy surrounds everyone seems just that little bit happier.

This kind of atmosphere seems to be playing nicely into the hands of the Aussies. On both the men’s and women’s side they’re flying the flag with displays ranging from the gutsy to the sublime. Jarka Gajdosova battled hard in both her matches but ultimately succumbed to Jamie Hampton in three sets, 62 76(1) 62, while Sam’s 60 63 demolition of Irina Falconi was nothing short of brutal. She ultimately lost in an bruising near-three hour battle against Nadia Petrova.

The men are doing it too, with Matty Ebden upending Julien Benneteau in three (it took him a while to settle but when he did there was no stopping him). And what about Marinko Matosevic? It takes something to get a compliment from the journos who frequent the press room but he got plenty during his match against former US Open winner Juan Martin del Potro. For much of the first set and parts of the second he went toe-to-toe with one of the biggest hitters – and most feared opponents – on the ATP World Tour, suggesting that it won’t be long before he breaks into the top 100. Of course, we’ve not forgotten Bernie. From the sublime to the, um… An outstanding first set against Gilles Muller was followed by a tight second and capitulation in the third. Ah well, there’s always Miami…

But before Miami, we have another week to go in Indian Wells. There’s been some outstanding matches so far, a smattering of upsets (Guillermo Garcia-Lopez taking out two-time Aussie Open finalist Andy Murray in the second round tops the bill) and plenty to mull over. Not least ‘the bug’. Tennis is a battle of attrition, and only the mentally and physically strongest prevail. At this stage in the competition you have to say that whomever prevails at the 2012 BNP Paribas Open is going to be the one who not only battles the hardest, but survives the longest. Maybe, the one who doesn’t breathe in…