Jarmila Gajdosova has moved into the second round at Indian Wells after beating American Coco Vandeweghe, while Casey Dellacqua fell to Elena Vesnina. 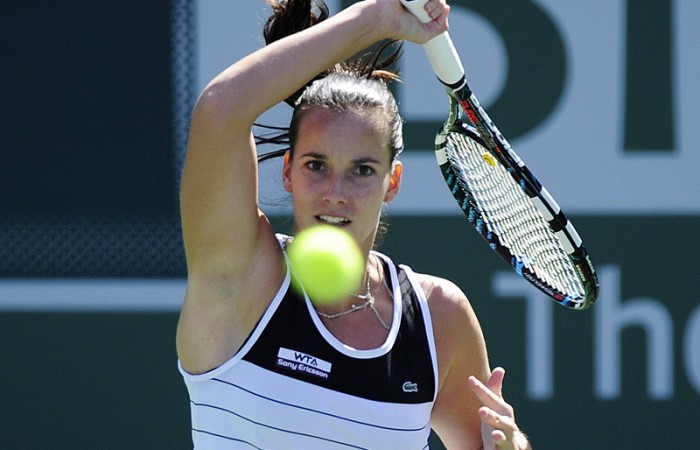 Aussie No.2 Jarmila Gajdosova has shrugged off a scratchy start in her first-round match at the BNP Paribas Open in Indian Wells, roaring back to defeat Coco Vandeweghe in three sets.

Gajdosova fell behind 5-1 in the opening set on Stadium Court against the tall, powerful American, who at world No.159 was a wildcard into the main draw.

Despite rallying her way back into the match to close the gap to 5-4, Gajdosova still dropped the opening set.

Yet her greater experience shone through. As the match progressed Gajdosova reeled in her 20-year-old opponent, wrapping up a 4-6 6-3 6-3 win in two hours and five minutes.

It was the Australian’s first career win in the Indian Wells main draw.

In the second round, the 52nd-ranked Gajdosova will take on No.22 seed Yanina Wickmayer of Belgium.

Later in the day, Casey Dellacqua put up a good fight against Russian Elena Vesnina, before ultimately falling in two tight sets, 6-4 7-5.

Dellacqua, a qualifier into the main draw, made the world No.54 work hard for the victory. With Vesnina serving for the match leading 5-4 in the second set, the Western Australian broke serve to level scores.

Vesnina broke back to love to gain another opportunity to serve for the match, only to watch as Dellacqua saved two match points and move just one point away from sending the set into a tiebreak.

But it was not to be. Vesnina responded strongly, winning three consecutive points to take the match. In the second round, she will face No.32 seed Christina McHale of the United States.

Dellacqua remains alive in the doubles draw, partnering Sam Stosur. The pair will take on the Slovenian/Polish team of Andreja Klepac and Alicja Rosolska in their opening match.