In a rematch of their battle at the same stage of the Dubai event last year, Jelena Jankovic again came out on top against Aussie No.1 Sam Stosur. 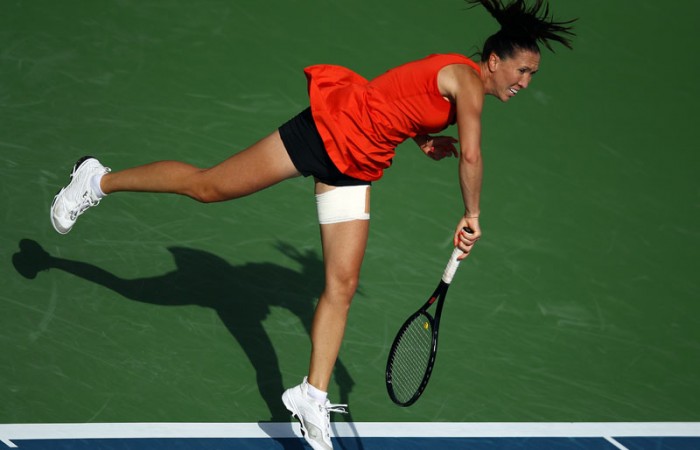 Sam Stosur has been dumped out of the Dubai Tennis Championships, going down 6-4 6-2 to Jelena Jankovic of Serbia.

The eighth-seeded Jankovic was in control throughout the match on Thursday as the fourth-seeded Stosur struggled with her game.

The Australian seemed to rush her shots for much of the first set, hitting the ball early and returning it long and wide.

Stosur broke Jankovic early in the second, but the Serb broke right back and then pulled ahead 5-2 before wrapping up the match in one hour and 30 minutes.

“I’m happy with the win,” Jankovic said. “It’s never easy. Against her, we always have tough matches.”

“I think the key was my return,” Jankovic said. “You know, she (Stosur) has one of the best, if not the best, serves in the women’s game. It’s never easy to return her serve.

“But usually she likes to serve and then start dictating the point with her forehand. I didn’t really allow her to do that … I was pretty much in control the whole time.”

Stosur was disappointed she missed a chance to bounce back from last year’s loss to Jankovic.

“I definitely didn’t play as well today,” Stosur said. “I mean, she played all right. She served quite well. I felt like I was getting pushed back.

“I think today she stayed up on the baseline quite well and I didn’t,” Stosur said. “But I think it was more that I don’t think my forehand was as good as what it needed to be.”

The 22-year-old Wozniacki eased through the first set and then overcame tougher resistance in the second before overcoming the Serb.

“I’m very pleased to get through that in straight sets,” Wozniacki said. “Ana really stepped it up in the second set, took the balls very early, and just played really well actually. She took her chances and had nothing to lose.”

Wozniacki is the highest-seeded player left in Dubai at No.3 after top-ranked Victoria Azarenka pulled out of the tournament on Wednesday because of an ankle injury.