Stosur falls to Azarenka in Doha

Sam Stosur was no match for the might of Victoria Azarenka, falling in straight sets to the world No.1 in the final of the WTA Qatar Open. 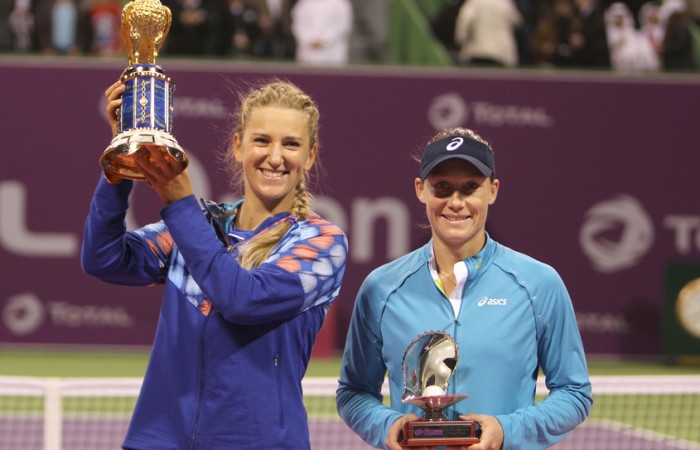 World No.1 Victoria Azarenka extended her domination over Australia’s Samantha Stosur to win her third successive title of the year at the WTA Qatar Open on Sunday.

Azarenka showed no signs of discomfort from her overnight injury scare in the semi-finals against Agnieszka Radwanska by beating Stosur 6-1 6-2 in a one-sided final to extend her unbeaten streak in 2012 to 17.

The Qatar Open was Azarenka’s 11th title, 10 of them coming on hard courts.

She maintained her perfect record against the Australian whom she has beaten in five career clashes beginning in 2008; no match going to three sets.

Sunday’s win also completed a remarkable 12 months for Azarenka who lost to Daniela Hantuchova in the first round in Doha in 2011, a defeat that led her to contemplate retirement before being talked out of it by her mother and grandmother.

“I am really proud of the way I played today,” said Azarenka, fighting back tears.

“I was not 100 per cent after my fall yesterday and I knew I had to adjust my game and everything went according to plan.”

Stosur, who was playing her first final of the year, was bidding for her fourth title, but Azarenka was too good for the world number five despite rarely hitting top gear.

The Australian Open champion broke Stosur in the third game of the first set from 40-all when the Aussie hit a ball long and then netted an easy volley.

Stosur again made crucial unforced errors in her next service game, putting a forehand into the net and then missing an easy smash before a powerful forehand return fetched Azarenka her second break.

The Belorussian then retained her serve to lead 5-1 and, following another error-ridden service game by Stosur, clinched the set with a fine volley.

The second set was also played along the same pattern as Stosur failed to reduce her errors and soon Azarenka had taken a stranglehold on the match by racing to a 3-0 lead.

And although the Australian managed to win two service games, Azarenka then broke her again in the eighth game to maintain a hundred per cent record in finals this year.

“Last year I lost in the first round and watched someone else lift this beautiful trophy,” Azarenka said. “But now I have this for myself.”

Stosur was happy after making her first final of the year.

“It’s been great to be able to turn around my form so quickly after a disappointing month first up, so I’m really pleased that I have been able to pick it up and make it to the final,” she said.

“As far as tonight goes, I think she played very well, very solid, as usual.”

Third seed Stosur left the tournament as the first Australian woman to earn more than $10 million in career prizemoney.