Sam Stosur overcame an injured Marion Bartoli to reach her first tournament final in 2012, where she will meet world No.1 Victoria Azarenka. 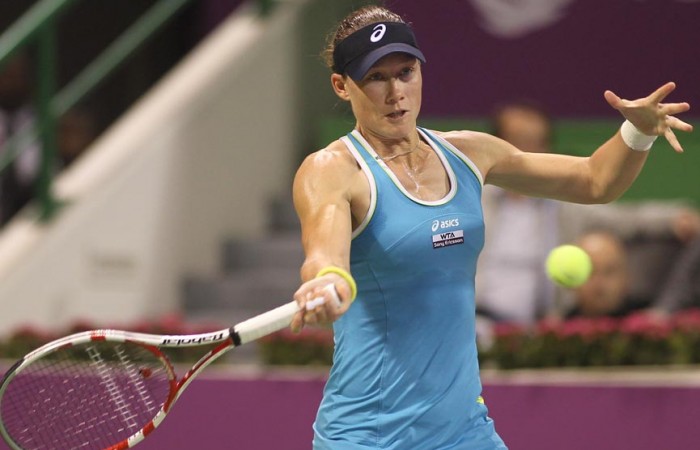 Australia’s US Open champion Samantha Stosur will battle world No.1 Victoria Azarenka in Sunday’s final at the WTA Qatar Total Open after her rival Marion Bartoli of France retired early in the second set with cramps.

Azarenka overcame a second-set injury scare to thrash Aginezska Radwanska 6-2 6-4 and sweep into the final, taking her unbeaten winning streak in 2012 to 16 matches.

“You always want to win a match playing the full match out and winning match point,” Stosur said.

“So any player will always take it if you play a set or two sets, but of course in the nature of the sport, you want to be able to finish it.”

Azarenka won despite having court side treatment on her left foot immediately after Radwanska broke back in the second game of the second set.

The world number one was in apparent pain as she had her foot strapped, and for a few minutes it looked like she too would call it quits like Bartoli did an hour earlier.

But after a near eight-minute delay Azarenka came back with renewed determination that left Radwanska completely at her mercy.

After the scores were tied at 2-2, Azarenka won three games in a row to lead 5-2 and although Radwanska herself had a break and retained her serve to close in at 4-5, the Australian Open champ was not letting the opportunity slip by, winning the tenth game 40-0 with a forehand down the line to reach her third final of the season.

“Honestly, I don’t know how I managed to pull it off,” she said.

“I had to concentrate very hard on every point, but I am happy that I made it,” added Azarenka, whose winning streak equals the now retired Justine Henin’s record set in 2004.

Earlier Bartoli decided to call off her bid for a first title in Doha after losing the first set 6-3 to Stosur.

“Well, actually it started yesterday during the match against Lucie (Safarova),” Bartoli said.

“In the third set I really felt like my right calf was starting to cramp, and I really had to make sure I finished that third set very quickly, because I was really feeling the cramp coming in on the calf.

“I had a lot of treatment yesterday after the match. Today when I started to warm up, I still felt it.”