Sam Stosur's three-set win over Monica Niculescu at the WTA Qatar Total Open has set up a semifinal showdown with No.5 seed Marion Bartoli. 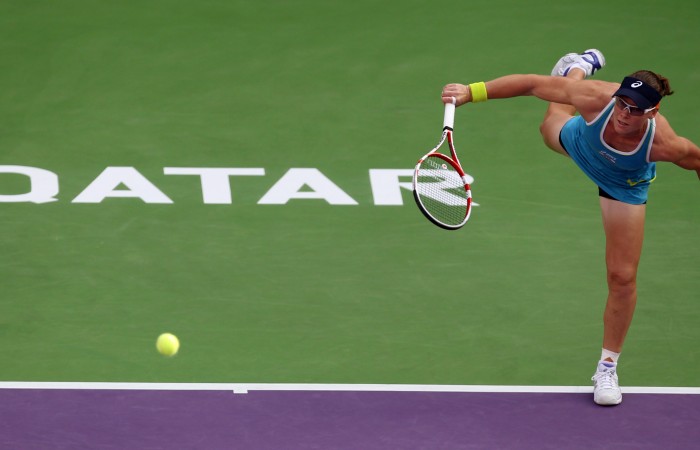 US Open champion Sam Stosur reached her first semifinal of the year by overcoming the unorthodox Monica Niculescu 6-2 2-6 6-3 at the Qatar Open on Friday.

Top-ranked Victoria Azarenka swept aside Yanina Wickmayer of Belgium 6-0 6-4 for her 15th straight win to set up a semifinal clash with fourth-seeded Agnieszka Radwanska of Poland, who beat Christina McHale of the United States 6-1, 6-1.

After crashing out of her home Australian Open in the first round, Stosur has won three straight matches in Doha.

“It’s a really good feeling,” she said. “I guess it’s still only February, so to bounce back relatively quickly is always pleasing. Yeah, it’s definitely nice to be on the winning side than not.”

Stosur jumped out to 5-0 enroute to winning the first set. But Niculescu turned the tables in the second, breaking Stosur twice to go up 4-1 to even the match. Niculescu uses plenty of spin and plays with a two-handed backhand and forehand. She also was more aggressive, winning many of her points at the net and serving better.

Stosur regained the momentum in the third, leading 3-0 only to see Niculescu take advantage of errors to level 3-3. But with Stosur serving at love-30 in the seventh game, Niculescu failed to take advantage. She missed an easy volley to let Stosur back in the game and then Stosur hit a great forehand in the corner to go up 4-3. She ran off the final two games.

“For sure, I got off to a really good start and wasn’t under too much pressure at all,” Stosur said. “Then early in that second set, I feel like I missed some of those opportunities.

Stosur will face fifth-seeded Marion Bartoli of France, who ended the strong run of Lucie Safarova of Czech Republic, 7-5 4-6 6-1. Safarova had reached the quarterfinals with victories over second-seeded Caroline Wozniacki and then 14th-seeded Svetlana Kuznetsova.

The 28th-ranked Safarova kept it close for the first two sets, but just ran out of gas in the third as Bartoli broke her to go up 2-0 and again for a 5-1 lead.

Azarenka said she played a “perfect set” to win the first set 6-0 but the second set was much more competitive. The two players traded breaks throughout until 4-4. But then the Belarusian ran off the last two games, winning a love service game to close out the match.

“Second set I had opportunities in every single game. I just couldn’t really convert them,” Azarenka said. “But it’s important the way I finished the second set. It was the same way I started the match.”