Sam Stosur has continued her good run in Doha, breezing past Petra Cetkovska overnight. World No.1 Victoria Azarenka joined her in the quarterfinals. 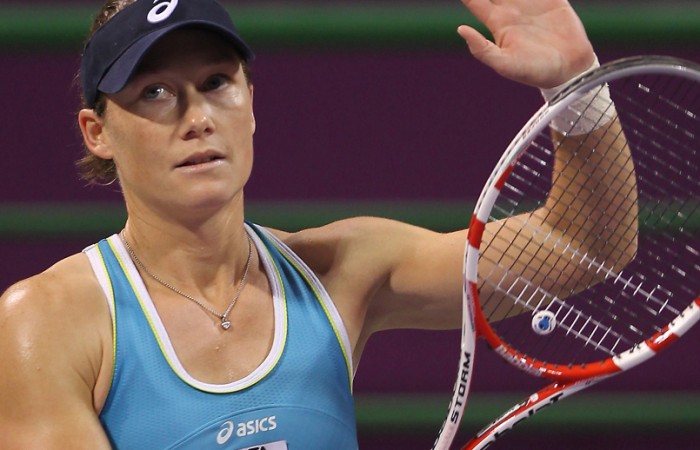 Australian Samantha Stosur has her season back on track, posting her first back-to-back victories of the year to advance to the quarterfinals of the Qatar Open tennis tournament.

Third-seeded Stosur, who is yet to drop a set in the event, took advantage of shaky serving from Petra Cetkovska to win 6-3 6-2 on Thursday in the third round.

World No.5 Stosur, who lost in the first round at the Australian Open and in Sydney, used her kick serve to keep the 30th-ranked Cetkovska off balance.

She was helped mightily by Cetkovska, who all but handed the first set to Stosur when she double-faulted three times in the eighth game to give her a 5-3 lead. Stosur closed out the first set when Cetkovska returned long.

World No.1 Victoria Azarenka swept aside Simona Halep of Romania 6-3 6-1 to also reach the quarter-finals, while Lucie Safarova dumped Svetlana Kuznetsova out of the tournament and fourth-seeded Agnieszka Radwanska saved two set points in the first set on her way to beating Varvara Lepchenko of the United States 7-5 6-1.

Azarenka responded to losing her serve and falling 3-1 behind to Halep by winning eight straight games to lead by a set and 3-0. Azarenka finished the match with another break on a forehand winner down the line.

“I never played her before, so I was adjusting a little bit to her game style and I don’t think I really played the right way those first, like, three games, four games,” Azarenka said.

“But then I started to get my rhythm more and, you know, putting more pressure on.”

The Australian Open champion from Belarus next faces Yanina Wickmayer, after the Belgian beat Ksenia Pervak of Kazakhstan 6-4 6-0.

Two-time grand slam winner Kuznetsova lost to Safarova 7-6 (8-6) 6-3 for the second time this year. It was the second big win in two days for the 28th-ranked Safarova, after she beat former No.1 Caroline Wozniacki.

After saving two set points and closing out the first set, Safarova broke Kuznetsova to go up 5-3 in the second.

“I like to play on these courts and I feel confident here. I did very well last night against Caroline and followed that up with a very tough match against Svetlana,” Safarova said.

“Everything is just clicking together for me this week. I feel very good on serve and it’s helping me to win points in key moments.”

Safarova moved on to meet the fifth-seeded Marion Bartoli, who beat Tsvetana Pironkova of Bulgaria 6-3 6-3.

Radwanska had a much tougher time with Lepchenko than she expected. Radwanksa saved two set points and went on to win the next two games to close out the first set. Lepchenko’s play became increasingly erratic and she dished up 37 unforced errors for the match compared to 10 for Radwanska.

Christina McHale of the United States will play Radwanska in the quarters after needing more than two hours to beat Shahar Peer of Israel 4-6 6-3 6-4.