Stosur wins in Doha, Wozniacki out 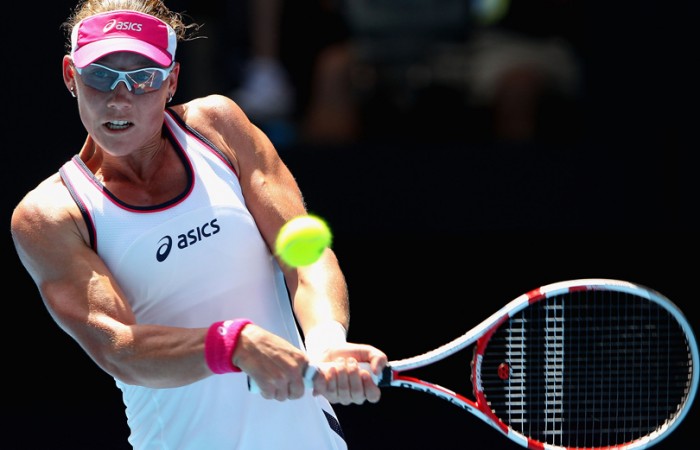 US Open champion Samantha Stosur scored a tight straight sets win over Sorana Cirstea on Wednesday in the second round of the Qatar Open tennis tournament.

The Australian advanced with a 6-4 7-6 (7-4) victory in a reversal of her shattering straights sets exit to the Romanian in the first round of the Australian Open.

Cirstea had eliminated another Australian, Jarmila Gajdosova, in straight sets in the opening round.

Caroline Wozniacki – playing her first match since losing her world No.1 ranking – crashed out, squandering three match points in a 4-6 6-4 7-6 (7-3) defeat to Lucie Safarova.

There was also misery for defending champion Vera Zvonareva who quit with a hip injury midway through her second-round match against Romania’s Monica Niculescu.

Wozniacki, seeded two but now ranked at four in the world, was deposed from the world top spot when she was knocked out of the Australian Open quarter-finals.

“I just want to get out of here (the media conference room). You don’t want to stay when you lose a match like that,” said Wozniacki.

“It’s really disappointing but you have to move on,” added the Dane, who was runner up twice in Doha – in the 2010 season-ending championships and last year’s Qatar Open.

There were no such problems, however, for newly-crowned world No.1 and Australian Open champion Victoria Azarenka who cruised into the third round, beating Germany’s Mona Barthel 6-1 6-0.

The Belarussian top seed will take on Romania’s Simona Halep.

Safarova, who is 2-1 in career clashes with Wozniacki, said: “Unless you win the final point, the match is not over.

“I just wanted to keep fighting. It feels absolutely amazing,” added the 25-year-old, who has won four titles on the WTA Tour.

Even the presence of golfer boyfriend Rory McIlroy couldn’t inspire Wozniacki as she made several unforced errors on big points to allow Safarova back into the match in the second set.

The Dane also failed to take advantage of three match points in the 10th game of the third.

Buoyed by the let-off, Safarova really turned it on in the tiebreaker, pulling away after the scores were tied 3-3, a lucky net cord giving her a 4-3 lead.

Earlier, Zvonareva’s hip problem came back to haunt her for the second consecutive week when she called it quits after trailing Niculescu.

Niculescu had taken the first set 7-5 and was leading 3-2 in the second when Zvonareva, the sixth seed, decided she couldn’t take the pain anymore.

Last week in Pattaya, Zvonareva quit during her quarter-final match with Sorana Cirstea.