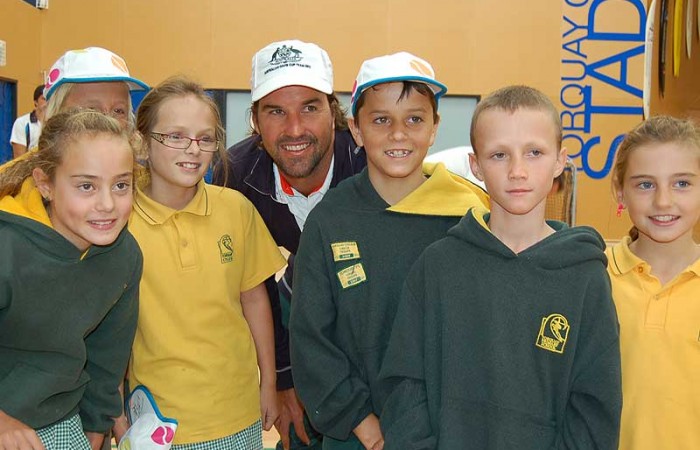 The charismatic dual US Open champion – training at Geelong Lawn Tennis Club this week in preparation for the Davis Cup tie against China starting Friday – made time to introduce primary school-aged children at nearby Torquay College to the starter program for young players, MLC Tennis Hot Shots.

Rafter spoke of his passion for tennis, starting at age five and playing throughout primary school ‘just for fun’. He then answered questions from the young audience at school assembly, including some curly ones such as ‘how many games of tennis have you played?’

The Aussie Davis Cup captain estimated at least 800 matches – his most favourite being those held at Wimbledon – and ‘thousands of games.’

Rafter later had a brief Hot Shots-style hit with several lucky students, introducing many to the concept of playing with smaller racquets and soft compression balls on mini courts. Organised and attentive, the excited listeners later mobbed Rafter as he left, embracing him enthusiastically as he prepared to leave for Davis Cup duties in Geelong where Australian players Lleyton Hewitt, Bernard Tomic, Chris Guccione and Matt Ebden hit centre court for doubles practice.

On Friday, the questions will get a whole lot tougher for Rafter and his team as they take on China in the Asia-Oceania zone one competition. Victory will move the winner into a second zonal tie, after which they will be in line to play-off for a place in the coveted World Group in 2013.

Follow live streaming of the Davis Cup on tennis.com.au from Friday.