Davis Cup: on for young and old 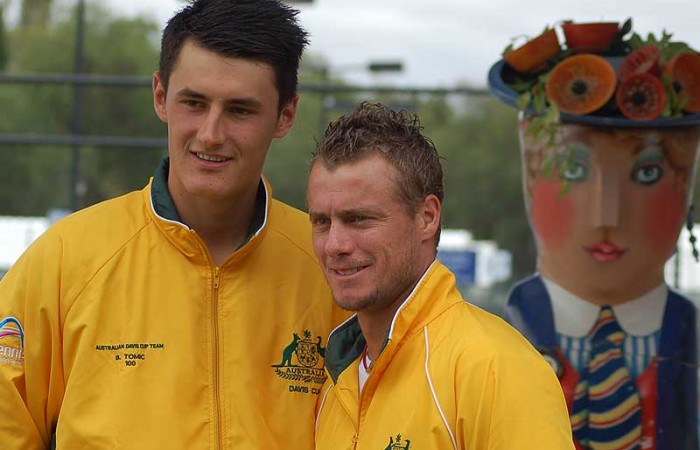 As Australia’s No.1 and No.2 singles players, Bernard Tomic and Lleyton Hewitt, went head-to-head in a practice match on centre court at the Geelong Lawn Tennis Club today, the home side’s Davis Cup captain Pat Rafter was making no secret as to who should and would play a lead role against China this weekend.

“Matty [Ebden] had great results last year, won a couple of back to back tournaments in America and he’s shown that he can play doubles and Bernie is now starting to believe that he can play,” Rafter said. “He’s getting better and once he realises he can play the game, he’s going to be a very good doubles player, he’s just got to start believing it and applying himself.”

Matching Todd Woodbridge with a record-equalling 32 Davis Cup ties this weekend, Hewitt looked bemused as Tomic defended himself against playing doubles, not getting up early to surf at nearby Bells Beach with his teammates and recent controversy over driving fast cars.

For the time being, all three subjects are off Tomic’s radar as he prepares to play his last matches in Australia for, potentially, six months.

“I’m focusing on tennis, I’ve got a lot of travel to do. My base is now in France … I’m not going to get that much time to be here.”

The Australian Davis Cup team has been in Geelong all week getting ready for the Asia Oceania zone group tie against China, having narrowly lost a World Group play-off to Switzerland last September.  “This year is about trying to get back into the World Group,” said Rafter. “It’s a fantastic team, it’s getting better and better.”

Hewitt said he believed the Australians belonged in the World Group and, were it not for some diabolical play-off draws, they would be challenging for the Cup this year.

“Davis Cups are getting tougher and tougher each year and we’ve had rough draws,” Hewitt said. “There is no doubt in my mind the last three, four, five years we’ve belonged in the World Group and I think we’ve played well enough.”

While the Chinese team players were lower ranked, no one in the Aussie camp was taking this weekend’s challenge lightly and both sides needed ample time to adjust to grass.

“Grass is always tough, we played obviously on hard courts throughout November, December, getting ready for the Aussie summer so it’s not easy,” said Hewitt. “I feel like the first couple of days, the most important thing is the footing. My record on grass, going from the French Open into Queen’s and Halle in the past has been exceptional, so I feel like I’m moving and hitting the ball really well.”