A refreshed Samantha Stosur aims to spark her faltering 2012 season into life in Australia's Fed Cup tie against Switzerland in frigid Fribourg this weekend. 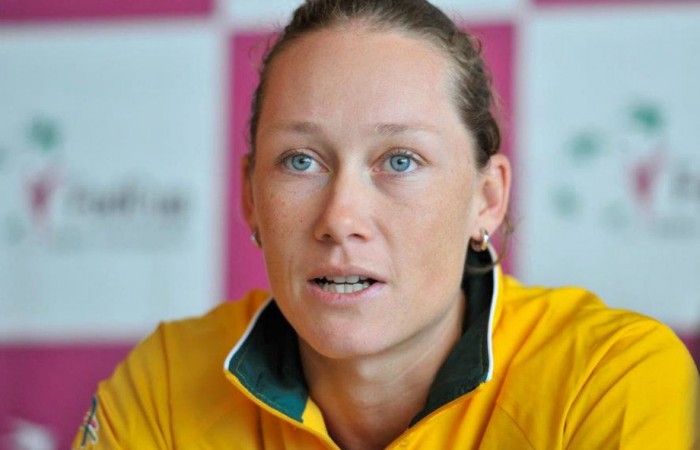 A refreshed Samantha Stosur aims to spark her faltering 2012 season into life in Australia’s Fed Cup tie against Switzerland in frigid Fribourg this weekend.

The US Open champion had an unplanned break after her disappointing home summer – just one win from tournaments – ended in a first-round exit from the Australian Open.

After stumbling under the spotlight at her home Grand Slam, Stosur took a holiday on South Australia’s Eyre Peninsula to clear her head.

The world No.5 said the break, spent fishing and bushwalking, had helped her shake off the blues following her shattering loss to Romania’s Sorana Cirstea in Melbourne.

“I am not waking up every morning thinking about it,” said Stosur from the Australian Fed Cup team camp in Fribourg.

“I have the opportunity to try to start playing well again.

“Until I start doing that, it is still going to be a bit of a fresh memory.”

Stosur enjoyed watching the men’s competition at the Australian Open from afar following her early exit.

She was less keen about watching as the likes of winner Victoria Azarenka, Maria Sharapova and Petra Kvitova made big inroads through the women’s field.

“We are all competitors and you don’t want to watch the others enjoying their success,” she said. “It is not much fun.”

Stosur’s next match will be in very different circumstances to those over the past month.

She will swap sweltering summer conditions on hardcourts in Australia for a temporary indoor claycourt in Europe with the thermometer expected to dip as low as -18C in Fribourg on Saturday.

Following former top-10 player Patty Schnyder’s retirement last year, the Swiss team is without a player inside the top 100 for the World Group II tie.

World No.124 Stefanie Voegele, who has been as high as 63, is the top-ranked player in the Swiss team.

Stosur has nailed down one of Australia’s singles positions with Fed Cup captain Dave Taylor taking his time to decide on his No.2 player.

He has world No.40 Jarmila Gajdosova, world No.67 Jelena Dokic and world No.103 Casey Casey Dellacqua to choose between.

For Australia to return to the elite eight-nation World Group next year, it must win this weekend and then defeat one of the World Group first-round losers on April 21-22.

Australia dropped back to the Fed Cup’s second-tier following losses to Italy and Ukraine last year.

Stosur, a 2010 French Open finalist, skipped the surprise home loss to Ukraine in 2011 to maintain her ranking and momentum before Roland Garros.

With a busy year ahead that is likely to include the London Olympics, the 27-year-old wasn’t prepared to commit to a potential World Group play-off in April.

“I would love to play if possible but we are not thinking any further ahead than this tie.”

Australia have won four of their five Fed Cup ties against the Swiss and not lost an away tie since 2008.

Stay tuned to tennis.com.au throughout the weekend for live scores, videos, photos and news from the tie. Or follow us onFacebook and Twitter for updates.