The longest ever final in Grand Slam history and record attendance were just two of the records that Australian Open 2012 broke in what proved to be a memorable fortnight. 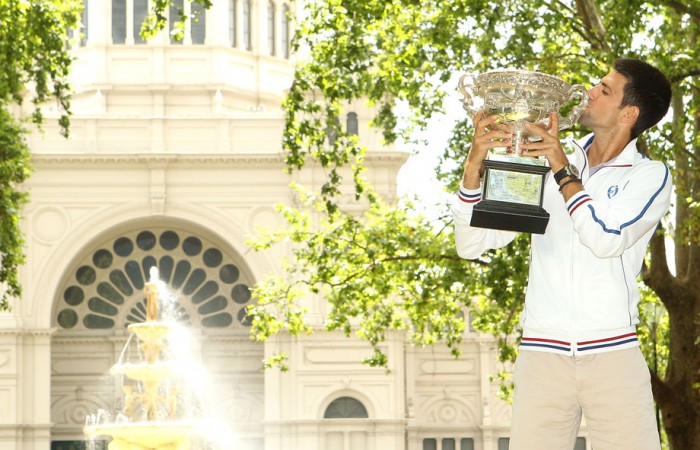 The longest ever final in Grand Slam history and record attendance were just two of the records that Australian Open 2012 broke in what proved to be a memorable fortnight.

It’s the third-straight major that Djokovic has won, a feat that just Rode Laver, Pete Sampras, Roger Federer and Nadal have achieved in the Open era, so it was fitting that Laver presented Djokovic with the Norman Brookes Challenge Cup.

Despite the match’s late finish, Australians stayed glued to their televisions. The final is ranked the top program of 2012 to date, with an average national audience of 1,860,000 people watching until the end and a peak audience of almost four million viewers nationally.

And the fans didn’t just watch on TV, they flocked to Melbourne Park in greater numbers than ever before. A total of 686,006 fans attended in 2012, smashing the previous record of 653,680 set in 2010. A daily attendance record was set on the middle Saturday, Heineken Day, with 80,649 enjoying the tennis.

Djokovic and Nadal were just two of 697 players who competed in a range of events, including 131 juniors, 20 wheelchair players and 22 legends of the game.

Reporting on all the action was 700 journalists, photographers and  videographers. This included 295 international media from 41 different countries. Asia represented 21 per cent of the international accredited media, a rise of 11 per cent on 2011. On top of this, more than 1000 broadcast media were accredited, covering 36 networks and broadcasting to more than 200 countries.

Fans also kept up with the tournament through the official website, australianopen.com. Prior to the men’s final 13 million unique users (an increase of 39 per cent on 2011) had racked up more than 44 million visits to the website (an increase of 33 per cent). Once there, they made over 287,000,000 page views.

The Australian Open Facebook page has been ‘liked’ more than 613,000 times, while the Australian Open Twitter account has doubled in size and now stands at over 82,000 followers. On mobile devices, the iPhone app has been downloaded 664,197 times and the Android app more than 100,000 times.

Fans who couldn’t be at Melbourne Park switched on AOTV where they watched more than 846,000 hours of footage.

It wasn’t just the players, fans and media who were busy, the stringers in the Wilson Stringer Hut re-strung 3300 racquets with 42 kim of string. Rafael Nadal had the most racquets re-strung, the Spaniard notched up 57 visits to the efficient stringers.

Matches were officieated by 335 umpires and linespersons from 29 countries around the world. While there were 370 ballkids from around Australia and 20 from Korea.

During the event more than 50,000 Wilson tennis balls were used, with many sold to fans and tennis clubs.

Getting the players to and from Melbourne Park were 215 drivers with 100 Kia cars. They made 40,000 journeys and drove 350,000 km. Around the grounds 7500 staff, contractors and volunteers worked together to bring Australian Open 2012 to life.