On the eve of the Australian Open women’s final on Saturday, 64 kids aged ten and under took part in the 2012 MLC Tennis Hot Shots Australian Open Tournament at Melbourne Park. 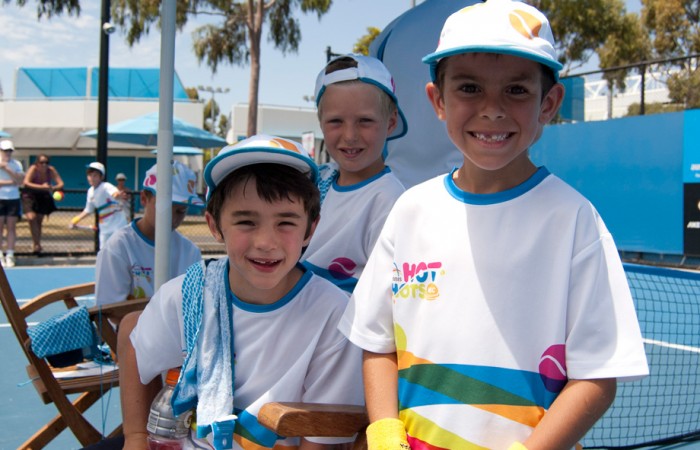 On the eve of the Australian Open women’s final on Saturday, 64 kids aged ten and under took part in the 2012 MLC Tennis Hot Shots Australian Open Tournament at Melbourne Park.

The initiative involved four teams of 16 kids playing each other in 10-minute matches in a round-robin format, with the overall scores collated to find the winning team.

Hot Shots Leader, Craig Morris, said the focus was on the kids getting an opportunity to experience the Australian Open, as well as get out on the court and meet new friends. “But above all, it’s just about the kids having fun,” he said.

Young Georgie Gough, aged 8, was lucky enough to present the flowers to the junior girls’ finalists at Rod Laver Arena before joining her friends for the MLC Hot Shots Tournament.

“That was the best,” she grinned as she waited by the side of the court for her turn to go on. “I haven’t played yet, but this looks really fun.”

Following the tournament, all the kids got the opportunity to cheer on local boy Luke Saville in the final of the Australian Open boys’ singles.

Ten-and-under tennis is progressing globally, with particular attention being drawn to it recently with the ITF rule-change this month requiring the use of low-compression balls and scaled courts.

With this in mind, Morris is pleased to be the first and only Grand Slam event to run an event for 10-and-under kids.

“All the Grand Slams run events for juniors but none have gone down to the 10-and-under level,” he said. “It’s exciting for Australia and for the event to be leading the world in this space.”

The MLC Tennis Hot Shots Tournament will be repeated on Sunday for a new group of kids ahead of the men’s final.