Call her a grunter, call her a squealer, call her what you like - just don't forget to call Victoria Azarenka a Grand Slam champion and world No.1. 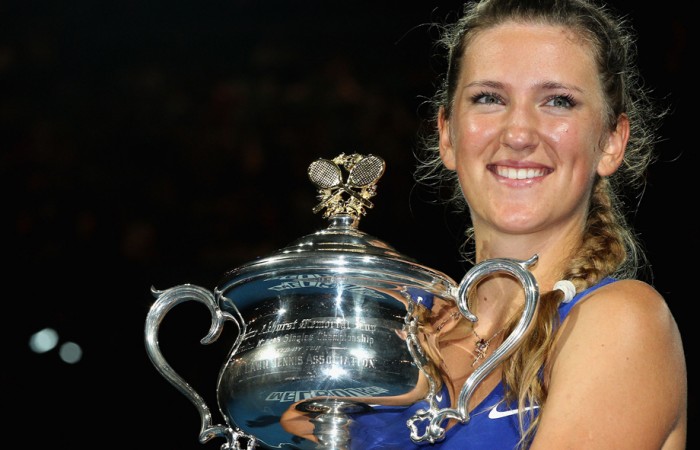 Call her a grunter, call her a squealer, call her what you like – just don’t forget to call Victoria Azarenka a Grand Slam champion and world No.1.

The 22-year-old overcame early jitters to win the battle of the tennis scream queens in just one hour and 22 minutes.

Apart from securing the top ranking and the record $US2.3 million ($A2.17 million) winner’s cheque, Azarenka is also the first person from Belarus to be crowned a Grand Slam singles champion.

Fighting back tears, the emotional champion thanked her coach, support team, parents and particularly her grandmother after raising the Daphne Ackhurst Memorial Cup.

“Thank you all of you for believing in me and because of you, now I can finally raise this trophy,” Azarenka said.

Sharapova was full of praise for the rampant winner.

“The first congratulations goes to Victoria,” the 24-year-old said after receiving a $US1.3 million ($A1.23 million) consolation prize.

“It is an honour to play against you. You’ve earned this title, you’ve worked so hard over the years and it’s a real honour to have your name on that trophy.

“Congratulations and cherish it for as long as you can.”

Sharapova feared for her career after undergoing serious shoulder surgery to her serving arm three years ago and was delighted just to be back as a grand slam force.

“But there’s no doubt that I’ll be back.

“As in any sport, you have your good days, you have your tough days and you have days where things just don’t work out – and today Victoria was better on so many levels and just played too good.”

Like Azarenka, Sharapova also went into the high-stakes encounter with the chance to displace Dane Caroline Wozniacki atop the rankings.

But the triple major winner had no answer to Azarenka’s awesome baseline firepower.

The third seed dominated from the back of the court, running Sharapova from side to side, and on several occasions even had the scrambling Russian attempting desperate left-handed returns.

Azarenka’s career earnings crashed through the $US10 million mark after she pocketed the biggest cheque in grand slam history.

But her victory wasn’t as popular with fans as it would have been for her bank manager.

In tennis’s version of when Harry Met Sally, When Azza met Shazza, at least one disgruntled spectator sported ear muffs during the high-decibel, ear-piercing encounter.

Azarenka, who candidly confessed to experiencing many meltdowns earlier in her career, said after her semifinal win over defending champion Kim Clijsters that her serving hand felt like it weighed about 200 kg as she tried to close out the contest.

The Belarusian made a similarly nervous start in her maiden Grand Slam final, coughing up three double-faults to drop her very first service game.

Sharapova consolidated for a 2-0 lead before Azarenka settled and began to take command.

Three errors from the fourth seed gifted Azarenka the break back for 2-2 and then there was no stopping the Belarusian.

She reeled off nine games straight to take the first set and then the title when Sharapova netted a backhand on her first match point.