Lleyton Hewitt has set up a fourth round clash with world No.1 Novak Djokovic at Australian Open 2012. 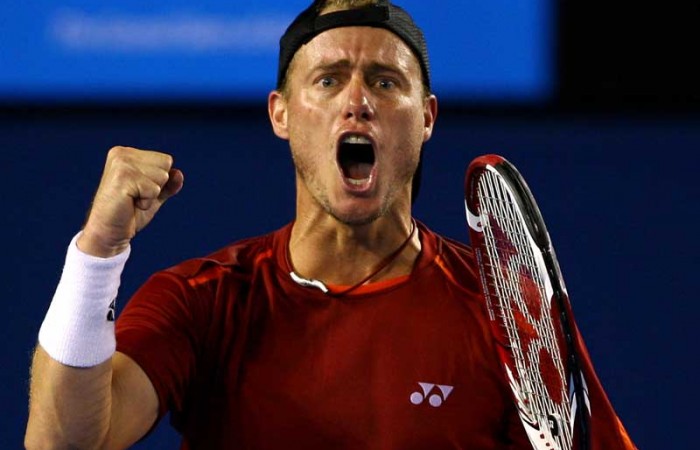 Lleyton Hewitt’s heart proved big enough to withstand a hail of bullets from big-serving Canadian Milos Raonic as he set up a fourth round Australian Open clash with world No.1 Novak Djokovic.

The 30-year-old Australian fell to his back with emotion after downing 21-year-old rising star Raonic 4-6 6-3 7-6 (7-5) 6-3 in Rod Laver Arena on Saturday night, despite the 196cm Canadian delivering a string of the tournament’s fastest serves.

Raonic, who started 2011 ranked No.156, has climbed to his current No.25 on the back of an eye-catching season which earned him the 2011 ATP newcomer’s award.

He clearly boasts some characteristics Hewitt does not – youth, height, power and a future much brighter than his present.

It looked as though Raonic was set to add a berth in the Australian Open last 16 to that list, after blasting his way through the first set.

But father-of-three Hewitt, whose No.181 ranking meant he needed a wildcard to compete in his record 16th Open, showed he still holds a big edge in a few less tangible characteristics.

Tenacity is one plus experience and the mental strength to find his best under pressure.

Those differences were typified when Hewitt won his only break point of the first two sets, deep in the second, with Hewitt scampering and retrieving until the Canadian fluffed an overhead from the baseline.

Those fighting qualities again came to the fore in the third set tiebreaker when, on his third set point, Hewitt brilliantly returned a Raonic thunderbolt to create a rally, then maintained the pressure until his younger opponent volleyed into the net.

They loomed large when Hewitt produced a stunning backhand passing shot at full pace on his way to a decisive break of the deflated Canadian’s serve in the fourth set.

But most of all when he survived two break points and needed three match points to serve out the contest.

While Hewitt has battled his way through, coming opponent Djokovic has conceded just 10 games on his way to the fourth round.

But it is worth noting Hewitt ended a six-match losing streak against Andy Roddick in round two, helped by the American’s injury retirement when Hewitt led two sets to one.

“A couple of months ago I would have done anything to be serving to be in the fourth round of the Australian Open,” Hewitt said of his relief at clinching the final game.

“You have to block that out, it is just another game, but it’s a big bloody game.”

He compared facing Raonic’s serve to facing an express paceman such as Brett Lee or Shaun Tait in the cricket nets.

Hewitt said Djokovic clearly deserved his No.1 status, but he would give him a fight.

“I’m going to have to go out there and take it up to him and see what happens,” he said.