Samantha Stosur's Australian Open is over before it really began following a first-round loss at Melbourne Park. 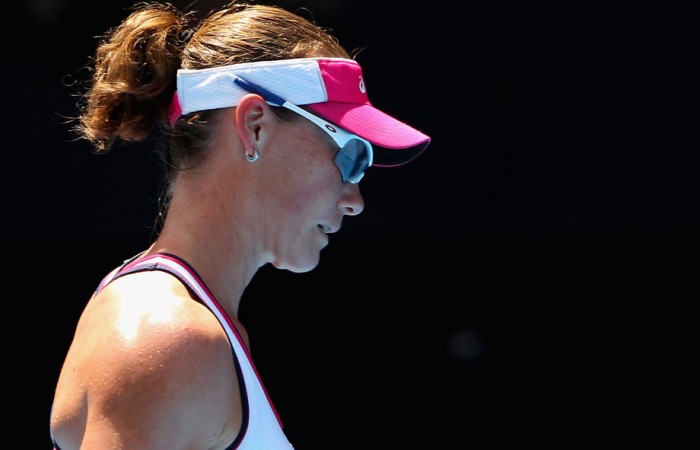 Samantha Stosur’s Australian Open is over before it really began following a first-round loss at Melbourne Park.

Stosur fought it out for 91 minutes before bowing out with a 7-6 (2) 6-3 defeat to Romanian Sorana Cirstea on Tuesday.

After a second-round loss in Brisbane and first-round exit in Sydney, Stosur arrived in Melbourne hoping to make inroads at her home major, but it wasn’t to be.

The Queenslander had comfortably beaten Cirstea in straight sets in both their previous meetings, but today Cirstea came out firing.

She dropped serve twice into the wind in the opening set and lost the tiebreaker as Cirstea, playing fearless tennis, thundered down an ace to close out the set in 49 minutes.

Stosur then made a slow start to the second set, dragging a backhand wide to drop her opening serve to love.

The sixth seed broke straight back and looked to have steadied after holding for a 2-1 lead.

But she was broken twice more as world No.61 Cirstea continued to club winners from both wings to deliver the first big upset of the championships.

Stosur made no attempt to disguise her devastation after penning one of the more disappointing chapters of her celebrated career.

“But I think you feel what you feel, whether it’s good or bad. It’s hard to suppress those emotions when it means so much to you.”

In 10 visits to Melbourne Park, Stosur has managed just 14 wins and she’s only twice progressed beyond the third round.

But having reigned in New York last September just two months after succumbing in the first round at Wimbledon, Stosur refuses to believe she won’t one day achieve her dream of winning the Australian Open.

“The last few years I got beaten by players who definitely played better than me on the day,” Stosur said.

“Third, fourth rounds obviously aren’t where you want to go, but certainly better than a first round. All you can do is come back next year and keep trying.

“Obviously, it’s not hard to improve on a first-round loss.

“I’ve got the rest of the year obviously. Of course I want to do better here, but I can’t think that, `oh, because this month didn’t go the way I wanted it to, the year is shot either’.

“It’s not going to deter me from doing what I want to do. If anything, it will probably spur me on to try even harder and do even more.”

But carrying the hopes of a nation, Stosur conceded she may have tried too hard to deliver.

“Of course I wanted to do very well here. You want it to come right now,” she said.

“That’s sport. Unfortunately you can’t pick and choose when it’s all going to happen for you.”

Stosur arrived in Melbourne down on confidence and openly admitted to struggling under the weight of expectation.

“It affects you physically,” she said.

“That’s probably the easiest sign for the outside people to see … to see that you tighten up, your shoulders do get tight, you don’t hit through the ball.

“When anyone’s nervous, I think the first thing that goes is your footwork. You don’t move your feet as well. Once that breaks down, it’s easy for other things to start breaking down.”

Stosur, though, paid tribute to Cirstea and said no Australian could feel more disappointed than her.

“There’s nothing probably more than my expectation. I really, really wanted to do well here and over the summer,” she said.

“I did everything I could to try and give myself a good opportunity. It obviously didn’t happen.”